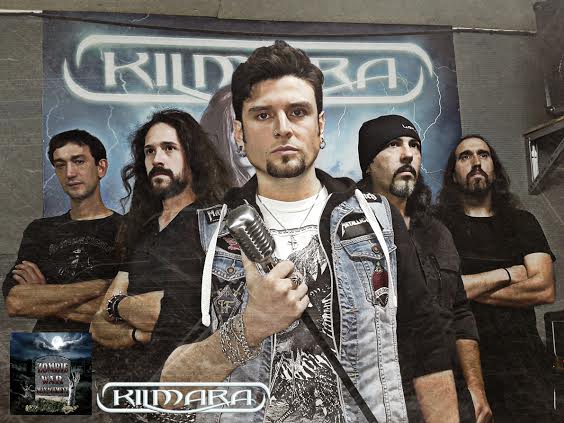 Give us a short bio of Kilmara. Who are the guys behind the music and who can we find on stage? KILMARA was formed first as Jadde more than 15 years ago by the core members of John Portillo and Kike Torres on guitars, Javi Morillo on drums and and then changed name to KILMARA with the entry of previous singer Chris Wolf. After a few changes in bass players, Didac Pla and the new vocalist Daniel Ponce complete the current line up.

What made you get into music, is this something you always wanted to do? All of us love music and are music fans first of all. So what got us into playing was the will to express our emotions through our own songs and of course also having a great time playing! We all had quite clear since an early age that we wanted to do this.

What do you like the most about being a musician? To be able to unify all our different influences and create something of our own because being able to do that is a unique experience and very gratifying. And of course playing live is amazing. The energy and feedback that is going back and forth between the audience and the band during the concerts is the best feeling in the world!

What do you like the least? Well the worst part is the little support that sometimes the metal scene receives, especially the underground and the new emerging bands. But thankfully there are always people like you guys that show support and that work hard keeping the scene alive and well. So thank you! Bands also have to be strong, work hard and keep the fight to persevere and reach their goals.

For how long have you been playing music? We all in the band have been doing this for many many years. No but really, we’ve all been part of bands since even before KILMARA’s birth and that is already a while back.

If you could go back in time, what would you do differently? We don’t really regret much of anything that we’ve done in the past because we believe that everything teaches you and you learn from every experience. But maybe we should have studied more when we were younger!

If you hadn’t been born in this century, when and where would you like to have lived? Maybe it sounds kliché, but we would would have loved to live among the Northern Vikings at around the 10th century.

Who are your all time heroes? There have been many great human beings that were true to themselves and that have helped humanity trough their actions and that have been, and still are a source of inspiration for many, such as Mahatma Gandhi. But now that their passing has been so recent we would like to remember Lemmy and Bowie as great and prevalent artists that will also keep inspiring and being heroes forever for generations to come.

Who do you have no respect for? We always try to be kind and respect everybody as much as possible, although it’s true that some of us human beings are a real disgrace sometimes and don’t deserve anything!

What do you do in your spare time? All of us have different hobbies and interests besides of course playing and discovering new music and new bands. But spending time with our families and loved ones is what we enjoy doing the most to be honest.

What’s the side of you that the public never sees? As we said just now, except for our closer circle of family and friends, our family persona is the one that most people will never know about us, because touring and on stage we always put on our best rock star personalities!

Do you think the public and critics expect too much from you? We don’t think that expect “too much” are the right words, but yes expect “the best” from us. And that is what we work hard to give of ourselves, absolutely the best we can! Also as fans that we are, we too expect the best from the bands that we love.

How hard do you push yourself? We push ourselves the most we can, and try to always keep improving and learning day by day.

When are you completely satisfied with your work? Being also very auto-critical with ourselves, there are always things that you think you would have been able to change or do better. But nevertheless, we do our best anyway and are happy and satisfied with how all our work has been done for now.

What’s the magic formula for success? We wish we knew! Just kidding. We don’t believe there is just one formula, but many factors that also influence a band reaching or not success. First of all hard work, a lot of practice, perseverance and always trying to stay true to what you like and believe in. Because if you don’t believe in it yourself, how can you expect others to do so? The cliché of being at the right time at the right place and meeting the right people is also helpful sometimes we think, but not the most important thing.

What is in store for the future? Are there any upcoming gigs and tours you’d like to mention? Yes! we are happy to announce that we will be playing live in Italy at the IL MALE FESTIVAL this 30th of January and also in our home city of Barcelona the 14th of May at the DOCTOR METAL FEST VIII. We are currently receiving offers to do tours around France, Belgium and China as well, and are also looking at the possibility to enter some major festivals this summer around Europe. We will confirm any new dates or tours as soon as possible. But this year, our main priority is to record our new album with Roland Grapow and hopefully release it before the end of the year or at the beginning of the next at the latest.

Where can we find more info about Kilamara? You can find everything you need to know about the band and about it’s activity in our KILMARA official Facebook page where we constantly update on news and where we can interact with the fans, and you can also buy and listen to our music at all major websites designed to do so. Now to conclude, thank you very much once again for this great interview and keep up the amazing work! Also thanks to everyone who has taken the time to read it and supports KILMARA. Hope to meet you all soon somewhere in the world! All the best, RAGE AND FIRE!