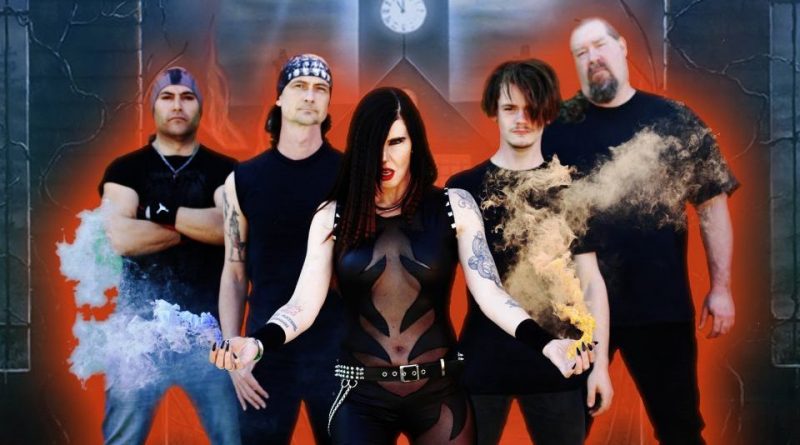 From the land down under we get “Rapture” from the mighty Temtris a ten-track giant let by the hugely talented Genevieve Rodda on Vocals, the face melting Guitars of Anthony Fox, Anthony Hoffman combined with the killer rhythm section of Youhan Avraham Dermo Drums and Nik Wilks on Bass guitar we have one pure molten ramping Metal Album to please the masses.

The opening salvo is the title track an instrumental of fist pumping excitement as the Band builds up your anticipation for what is due to unfold, then we are scorched by the “Flames of Defiance” the Drums hammer and deliver a statement of intent as Rodda’s Vocals join the fray with such power to shatter a plate glassed window this is one hell of a powerful start.

Up next is “Wings of Death” a punishing neck straining track with middle eastern tones this one thrashes and bashes your being mainly due to the ball busting rhythm section of Nik Wilks and Youhan really making their mark , it’s a song that surprises you with its delivery and passion.

The full-on Metal assault continues with my favourite track on here, this is just what the Doctor ordered one to get yourself partying and singing along loudly too as you “Run” and bang your head in full on Metal ecstasy!

“Serpent” opens delicately and then becomes some kind of monster Rodda mixes power and emotion on this beastie as Fox and Hoffman weave some magic with their riffs.

Listening to this track and the previous one it makes me wonder why Temtris aren’t more of a well-known name this side of the hemisphere, both are tremendous and pure Heavy Metal to take to your heart and soul (as is the whole Album).

The pounding Drums and thumping Bass lines lay down a metal trail of hellish delights and the mid-section is a guitar aficionado’s wet dream!

Fuck yeah “Parasite” has more angst and venom than a pissed of rattlesnake. The rich melody and powerful Metal continue with the breath taking “Breathe” an all-conquering piece of excellence.

“Carry You” sees the tempo brought down and the outstanding Genevieve Rodda shows her mellower side yet still maintaining such prowess. Penultimate track “Fight” delivers a real punch and knocks you for six with its head banging verve delivered in spades and there’s no respite as “Rise of Dawn” explodes outta ya speakers and has you raising your horns and saluting our antipodean chums once more! Fuck yeah!

“Rapture” is a rampaging Old School Metal Album that can only be described as TRUE METAL.

On the strength of this platter Temtris won’t be Australia’s best kept secret for too much longer.