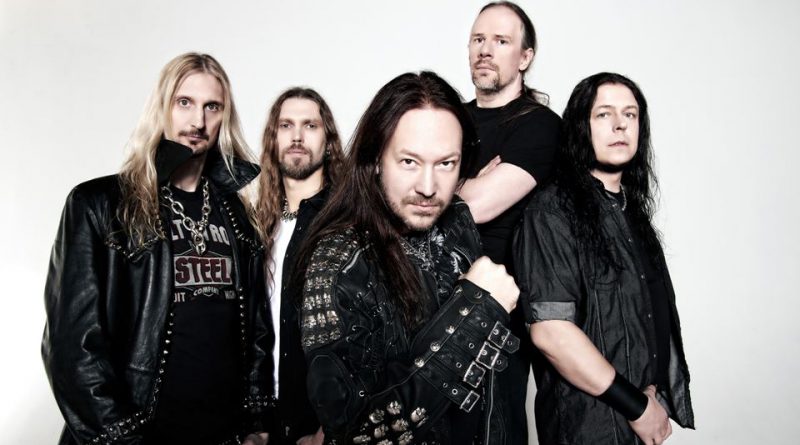 “Built to Last” its full to the brim of glorious choruses, uplifting horns in the air, heroic Metal merriment to enthuse and gratify the bands legions of fans.

Led by the distinguished face melting vocals of Joacim Cans the band return with an unstoppable Metal Fury, the opening track “Bring It” races out of the traps its full on Power entices you in as the Drums pound and the Bass thunders it’s a stupendous opener that grabs you with full force as the band take you into their realm.

Things get even better with the highly catchy and full on anthem “Hammer High” this is pure chanting, head banging rapture that will not leave your head for hours, days, weeks, years ad infinitum it’s a heroic number to unite all under the Hammerfall flag!

Kicking up a Metal storm these Swedes continue to bewitch you, cos being fair this is a band I have never really given a fair crack of the whip til recently and boy am I glad I have! This band fight and take the vow for this thing we call Heavy Metal this is powerful and stirring stuff.

“Dethrone and Defy” sees you unsheathing your swords eager for Battle, the song is fast and furious with some killer riffs and solos that see the Hammerfall Choir come to full effect this will be simply magical live with the other MUST play live “Hammer High”.

“Twilight Princess” is a more laid back number which showcases Joacims vocals in a more relaxed melodic mode and highlights the immense guitar man ship of Oscar Dronjak with Pontus Norgren.

“Stormbreaker “brings things nicely back up to speed, its truly addictive with head juddering riffs that are sure to please Hammerfall aficionados.

“The Star of Home” again has some stunning vocals from Joacim Cans where he stretches his larynx, the powerful momentum on this track just doesn’t let up.

“New Breed” is a song that needs to be really listened to and taken on board as Heavy Metal runs through all our veins, the lyrics and meaning need to be considered, then salute not only Hammerfall but all the bands who play Metal in all its different forms, another glorious track.

“Second to None” brings things to a close its slow build up lures you in as the effect of a ballad soon becomes something grandiose as the riffs fly and this keyboard driven track ensnares you. A breath taking finish to a stellar release.

Hammerfall may not be as huge in the UK as they are on the continent, I think yet again the UK is really missing out on another immense band, as these Swedes bring the Steel, Thunder, Heroic Metal Glory to your door and they are indeed “Built to Last”.