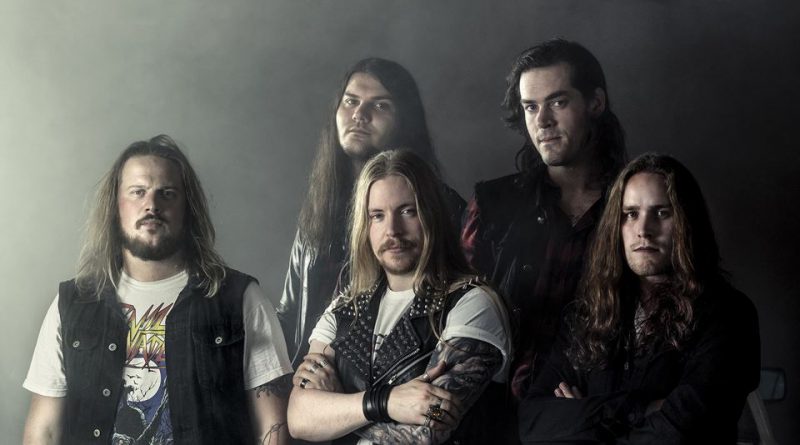 Continuing this tradition are the Mighty Screamer founded in 2007.

Having released two Albums to date “Hell Machine” is the bands third release and its a pure traditional Metal platter to enthuse, have you singing along and bouncing the night away.

Opening with “Alive” the band deliver some catchy riffs with a head thumping back beat.

This is a great start as the guys kick out some nifty grooves with the bands new Vocalist Andreas Wikström fully delivering the goods for these Swedes.

The next two songs are Album highlights “I’m on my Way” races out of your speakers with Anton Fingal and Dejan Rosić twin Guitars assaulting and battering your senses combined with the rhythm section of Fredrik Svensson on Bass and Henrik Petersson Drums this is a sure fire winning impressive song!

Next we have the title track “Hell Machine” this cries out for regular airplay on the radio its heavy and deliriously addictive as you sing the chorus along with these Scandinavians.

The Riffs are superb and the “whoa a woahs” will go down well live, this is a Metal Anthem for sure.

“Lady of The Night” bleeds Old School Metal, it wouldn’t have been out of place in the early Eighties, its a flamboyant killer track and my favorite on the album.

“Warrior” opens slowly then mutates into a chunky and juddering train of Metallic grooves.

When I first saw the Track listing I was a bit worried the Band had done their own version of Saxons “Denim and Leather” but worry not it isn’t.

This is Screamers very own “Denim and Leather” its a horn inducing, head shaking Anthem that they can be very proud of.

This is another one to have the crowd joining in with the guys for the chorus. “Monte Carlo Nights” is the heaviest song. It’s a pounding, rampaging beast and punch the air and bang that head too!

Final song “The Punishment” brings things to a close. It’s a belting and pulsating end to this Old School Metal inspired animal.

To sum up having made big waves in the past by playing Summerbreeze and Rock Hard Festival in 2014, The Band Have had a few line up changes since then but with a new singer in Anders and Bassist Fredrik on board the band seem to be a settled unit and ready again to let loose and deliver their very own “Hell Machine” upon the world!