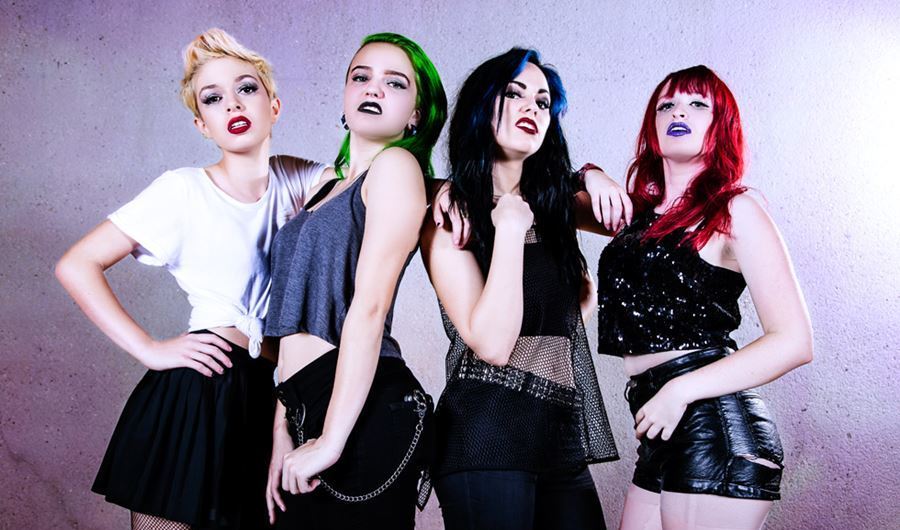 Coming off of a huge 2015, with an even bigger start to 2016, all girl Phoenix Rock quartet DOLL SKIN has quickly become an up and coming band that is hard to take your eyes off of.

With highlights including performing on SHIPROCKED CRUISE with Five Finger Death Punch, Halestorm, Seether, Hellyeah, and more, an appearance at 2016 Winter NAMM including massive signings with Lita Ford and Megadeth’s David Ellefson (and a well-received performance at the annual Indie Schecter Guitars Party), and a string of West Coast dates supporing metal supergroup Metal Allegiance, culminating in a performance at The legendary Whisky a Go-Go as part of the Lemmy Kilmister memorial.

2015 saw the Worldwide release of Doll Skin’s debut EP In Your Face, through Ellefson’s own label EMP LABEL GROUP, distributed via Megaforce Records, (also known as the launching pad for legendary big 4 thrash bands Metallica and Anthrax and many more) and Cargo Records in Europe, and set Doll Skin on a trajectory straight to the ranks of the Hard Rock elite.

Since its release, the band has garnered massive worldwide press and airplay, including 2 months of repeat spins on Rodney on the Roq on the World Famous KROQ, grabbing rotation and winning cage matches all over the US, topping playlists in Japan, and finding a home on playlists across Europe.

The band is set to hit the road again, with supporting dates for Punk legends The Dead Kennedys, Hellyeah, and an appearance at SXSW, in the midst of their first headlining radio tour.

The debut video “Family of Strangers” has already reached over 40,000 views via Vevo and Youtube, and the band just released the lyric video for their recently released second single “Wring Me Out”, unleashed earlier this month.