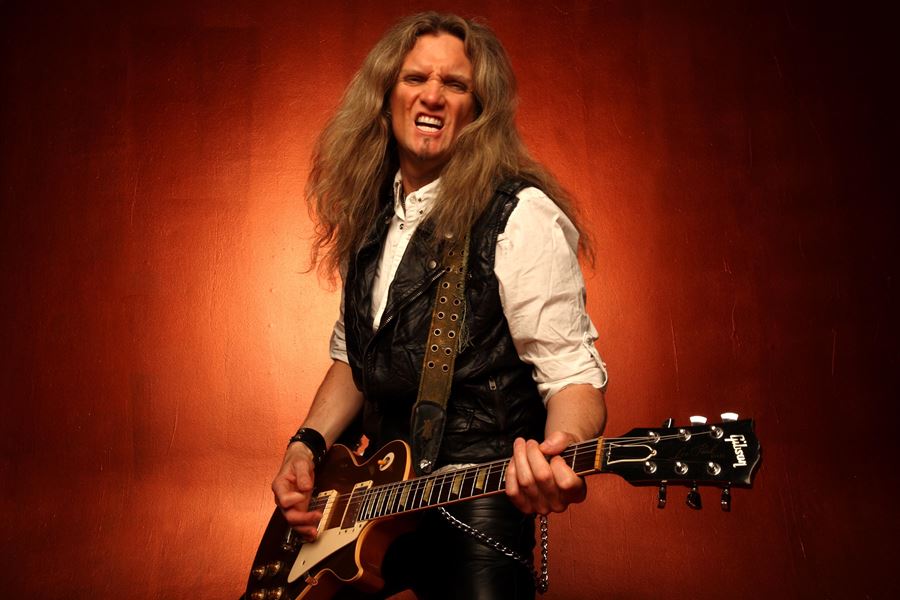 In case you don’t know Chris Cole, let me fill you in. Chris Cole, embodied by Mark Wahlberg, is the main character of a movie called Rockstar about a singer who one day get the opportunity to join and front his heroes in the band Steel Dragon.

How come you felt you needed to do a solo album? Well I have three solo albums out that was primarily instrumental guitar records, like solo albums that you expect from a guitar player.

One was finger style acoustic and two of them was guitar fusion and now over the years the fans have got to know me and my ranges or the show rock of ages, Trans Siberian Orchestra and now of course Whitesnake.

I have a lot of fans asking me why I’ve never done a record that’s just straight ahead rock stuff? (laughter) and that sounded like great fun to me but it have been a incredibly busy run, but finally over the last one or two years during down time I managed to make it happen.

To me it’s few blasting technical solos and showcase stuff you expect from a guitar player.

Yeah it led to an interesting dilemma ‘cause I wanted to create something that was just straight ahead rock , as you said without a lot of “wanking” and I wanted to avoid to be too self endogent or becoming to progressive and playing only for musicians on it.

This was something that came out sounding very much like a band and less a guitar player solo album. In the end however I did all the writing all the words and the melodies and the whole nine yards. It was a interesting dilemma I decided that the most appropriate thing was to give it a project name Joe Hoekstra 13:th and of course the album is called dying to live and will be out October 16 on Frontiers.

Producing, writing and arranging everything, would you say that you have control issues or just a very clear vision of how the album should turn out? No I wouldn’t say that at all, I think it just became my thing.

I had initially looked for more of just a writing partner, but all of the musicians that helped me out on this really was quite busy with their own thing so it was just the way it happened, but I’d be happy to collaborate with anybody, anytime and anywhere.

I just think that this particular album worked out that way and that’s a kind of a blessing for me because the songs really mean something to me and despite the fact that the project album feels like a labor of love and has some soul and spirit to it and actual meaning.

About the lyrics, how self biographic are they? Some of them are a direct representation of my life and others are more fantasy based, but all the lyrics are essentially about all the struggles we all do to become the person that we wanna be.

I think everybody has those obstacles, those battles to fight the struggles to arrive to what we find we’re meant to be in. That’s what the album essentially is about and I think that is something everybody can relate to in a certain degree.

“The ART of overcoming the obstacles”. For me that’s really where’s my head’s been for these last couple of years.

I’ve just wrote down everything I wanted to do better in my life and I just got a real self improvement kick and I think it is an art and it’s not something that you can just say “I wanted to do this” and then you automatically do it I think it’s disciplines and the actual struggle to follow though and that stuff.

What’s the difference between you today and let’s say five years ago? It’s a variety of things. I don’t know if I can necessarily pin point one thing but I just think I’m happier over all as a person.

Getting back to the music then. My favorite solo has to be on “Long for the days” can you break down the process of creating a great solo? Well obviously I think you wanna play from the heart and to the mood of the lyrics and the mood of the song so with that song it’s more of a fantasy based scenario, of somebody who’s blown the relationship so obviously the foundation of that solo is blues there are obvious some standard blues licks in there and a little bit of flare technical flare, I suppose towards the end.

Hopefully I’ve captured the mood of the song and obviously trying to do some of the foreshadowing in some of the vocal hooks. I think that the vocals don’t sing the melody until the outro.

Some of it we needed a heavier sound so I played my black custom Les Paul and I only used one amp and that’s a Friedman EE100 so everything essentially has the same sound on it.

Sometimes it’s different mic positions and different free amps and maybe some different settings on the nobs while we tweak around here and there (giggles) but it’s very much Les Paul and Friedman for the whole album. 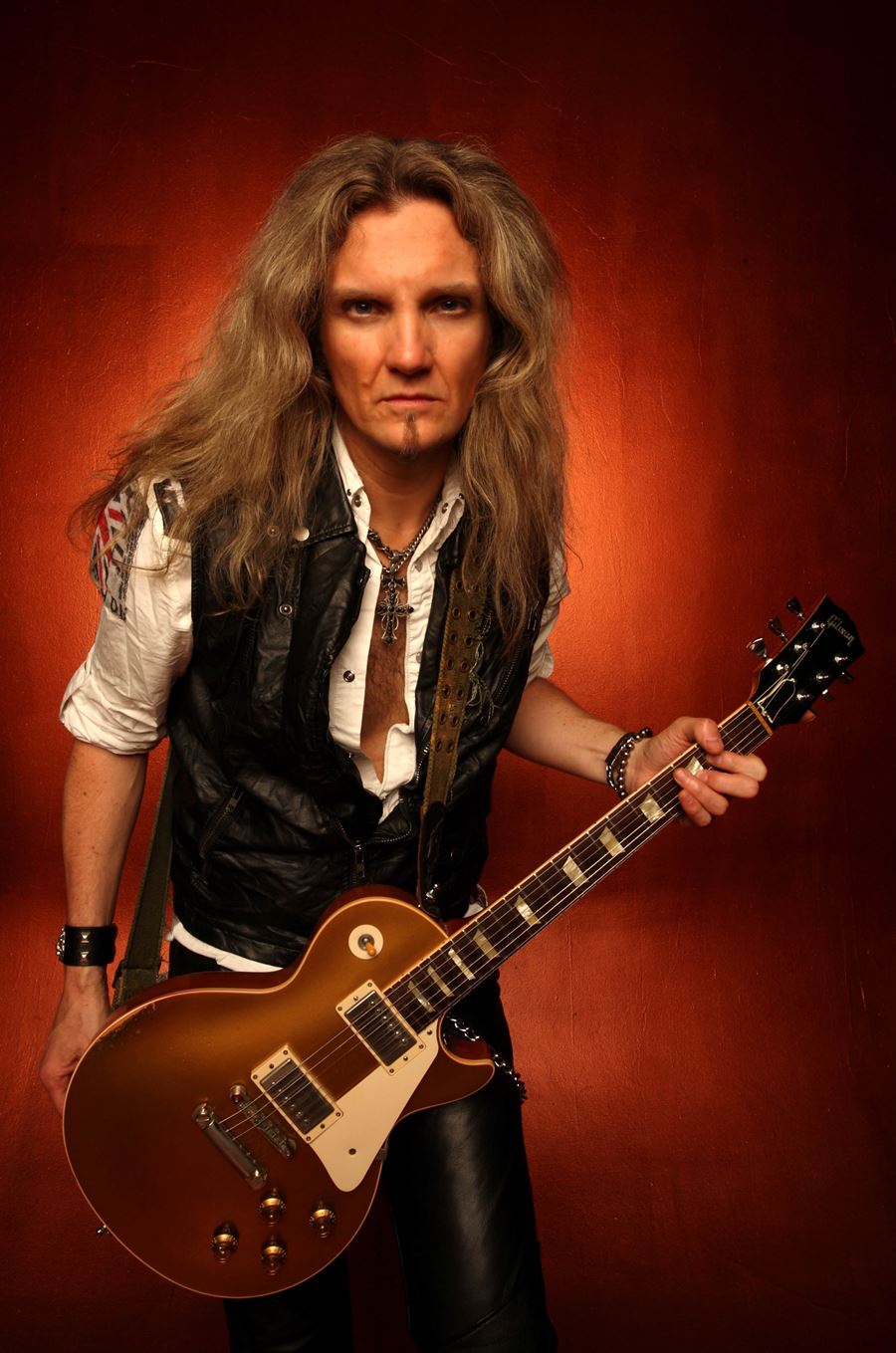 Including the acoustic intro? The acoustics are always Taylor. I always prefered Taylor acoustics.

You’ve been around for quite some time and what do you do for developing your playing? I try to not think too much about what’s hip and what’s cool and just follow my heart and my instincts and what I like.

It’s more a philosophy of trying to be productive and trying to give my all to what I’m able to do for a living. I feel very blessed to have a carrier to be able to play rock guitar for a living I think it’s definitely one of the greatest jobs you can have, so as long as I’m giving it my all and trying to be productive and putting a lot into it ‘cause you tend to get back what you put into it, then I’m happy so in terms of worrying of what’s cool, I don’t really do that.

Are there any plans for a tour? I’m just interested right now of getting the album out and seeing what kind of reaction there is to it and obviously to support it any shape and form would be extremely challenging with everyone’s busy schedules but I don’t gonna rule anything out, we just have to see how everything unfolds.

How did you manage to get this impressive lineup together? That’s interesting. I didn’t set up to do a superband album or anything like that it just kind of fell out to place that way, asking friends to help me out as I went.

I asked Tony Franklin first, because we had just finished a different project together and I said I wanted to make an album that is just straight ahead rock stuff, vocal songs and Tony was interested and I said “Well who do you wanna use as a drummer?” and he recommended Vinnie Appice.

And it just so happened right at that time Russel Allen had signed up to do the Trans Siberian Orchestra Tour that I do and I heard him and thought “Wow this guy is amazing”, so I got him on board as a singer and for singing the background I thought it would be nice to have another great singer so I called in a favorite for me, my friend Jeff Scott Soto so he came in even though he’s over qualified to be a background singer (laughter) and it became clear it was gonna be a project album.

I asked Jeff to sing the rest of the album to be the lead vocalist because I thought why not have more fun and it’s just bringing more to the party to have two great singers, two of the best singers of the classic rock scene today singing on it and after that I got them guitars on it, it felt like there was room for some keyboards, textures and maybe even to grab a couple of the solo spots so I asked Derek Sorenian and he was interested so all of a sudden I had this amazing line up and I feel very blessed to have these guys bringing the songs alive for me and I’m truly humbled.

I read somewhere that AC/DC really got you into the guitar gig and I take it Angus Young was the hero? Yeah, my parents was classical musicians so they had me on show the piano at a very young age but it was really hearing AC/DC at the age of 11 I believe, I heard “Back In Black” and it really changed everything for me and set me on the course that I’m on even today.

Would you be interested of doing a solo album if Angus would join you? [Laughs] Are you kidding! That would be amazing! I’d love to play. I’d would love just meeting Angus Young. I never met him so that would be great alone but obviously playing any music together that would be a wonderful thing.

This question hardly needs a big introduction; Whitesnake? I feel very humbled and honored to work with David and the situation that I have here. So many great players I have to work with here and David, I mean he’s Rock Royalty and he’s cracking me up ‘cause he’s such a woody, charming guy, and he’s telling me about working with Jimmy Page and with Richie Blackmore. Not everybody can do that so I feel very honored to have the opportunity to work with him.

Have you guys worked on any new material? I think David has a lot of stuff in mind, I think he’s very enthusiastic about Whitesnake right now and should have a very active next year, but I’m gonna let him fill you guys in on in terms of what he has in mind but I know it’s a couple of recording ideas and concerts and maybe some touring so, I let him fill you in but I’m very excited ‘cause he’s looking to have a very active next year so we’re feeling great and the opening this year here in North America just exceeded all expectations, just amazing.

A blissful three months, it’s just a killer line up obviously, you know. David, rock royalty, we have Tommy Alridge back there driving the ship. It’s a killer to turn around and realize he’s back there on the drums every night, it’s just a dream come true for me and to be in a guitar team with Reb Beach is just amazing.

Everybody knows that Reb’s such a rad beat player but he’s just a great rhythm player, alive with those classic Whitesnake riffs with him, it’s just an amazing thing, man!