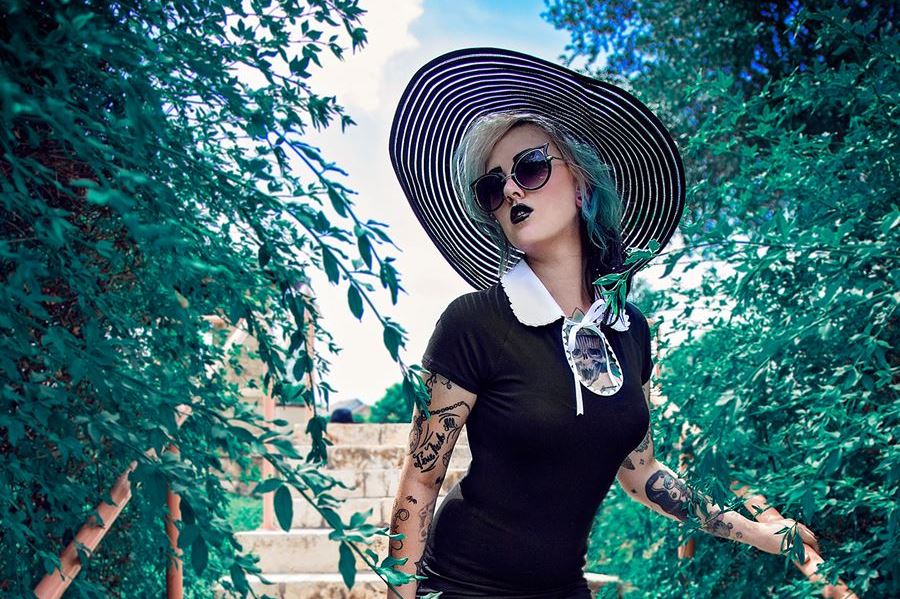 Violet Shrock is quickly becoming an internationally-known fetish and alternative model. This former California stunner recently moved to Texas and has been featured in numerous magazines as well as online advertising campaign.

Violet has found that her diverse portfolio and credits highlight her versatility as a model and why she’s always in such high demand. She loves to work with other creative people and strives to bring her own take to a photo shoot to really make it a fusion of her personality and that of the creative team.

Over the past year, Violet has had tremendous success as a model. She works hard to promote herself and most importantly, she believes in herself and always tries to help others grow as well. Violet has been modeling off and on since she was around thirteen. Her mom was a model and encouraged her to follow her passion.

She works hard to promote herself and most importantly, she believes in herself and always tries to help others grow as well. “I’ve always believed just to have fun with shooting and not be too hard on myself. If a shoot doesn’t quite come out, practice makes perfect.” When she is not modeling, she plays bass in a band out of San Antonio, Texas called The Cretin Bop. You can find her on Facebook and Instagram.

How would you describe your work, and what is your main goal with your work as a model? My main goal as a model would be to work with photographers and clothing and jewelry designers from all over the world.

I would describe my work as ever-changing it ranges from cheesecake pinup to Avantgarde styles. I really love to push my own boundaries and enjoy creating images that push others too.

What are your plans for the future, are there any new and exciting projects you would like to share with us? I always have a million irons in the fire and creative ideas that I am planning with photographers. Wicked Hailey Photography and I have some high fashion Resident Evil inspired shoot coming soon that promises to be something special.

How did you feel when you did your first ever fashion show or photo shoot? The first photo shoot is the hardest and sometimes very awkward. I was very nervous my first time being behind the lens. I needed a lot of cuing from the photographer, but after some coaching it went very smoothly. Every shoot comes with a little nervousness. I have learned to turn that nervousness in to fuel to do better ever time.

If your were not a model, what other profession would you have been doing instead? A mad scientist! (just kidding). I would love to become a Geriatrics doctor. I currently work in the field and find it completely rewarding.

If a young girl or a boy wanted to be a model what would your advice for them be? I’ve always believed just to have fun with shooting and not be too hard on myself. If a shoot doesn’t quite come out right, practice makes perfect. This industry is not as easy as it may appear on face value.

If you are not willing to make sacrifices, this may not be the industry for you. Sometimes those sacrifices are easy like a hamburger vs a salad, but sometimes you have bigger issues to tangle with. Knowing yourself is the only way to succeed. Never let someone else dictate your worth!