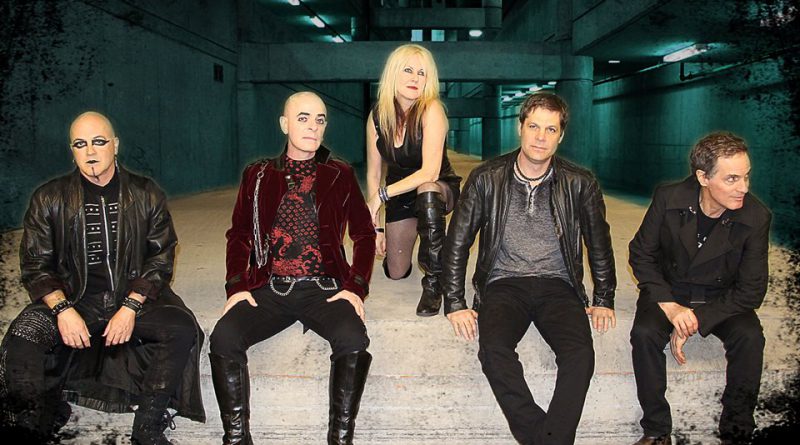 First of all, who am I talking to. Please tell our readers a little bit about yourselves. Hopefully we get to know some secrets about you that nobody knows.

This is Lyric. I’m the lead singer and lyricist in HEAD. Stone and I formed and created the idea of HEAD in late 2014. Our 1st full length CD, “Afraid to Sleep”, was recorded and released Feb 2016.

What listeners may not know is that Afraid to Sleep is an industrial-rock concept album that will take the listener on a myriad of dark emotions through the life of a woman named Alberta, based on the real life adventures of Lyric; “I use my past as a vehicle for ascension through music… I’m a survivor of alcoholic parents, an abusive father, kidnapping and death threats towards my family, so I exorcise my demons onstage through song”

If I can be said to be the soul of HEAD, then Stone is the heart… literally a “Heart of Stone”.

But, while I use my voice to share the pain, Stone was never much for conversation. Steeped in orchestral music and always drawn to darkness, his keyboards were his voice from an early age.

oD is from a dark background (literally – he was kept in total darkness for the first 6 months of his life).Nobody knows too much about The Phantom. He materializes for shows, rehearsing and recording, but the times between those events? No one’s really sure.

Being locked in the cellar for most of his youth… that changes a person. Styxx took his frustrations and abandonment issues out on anything nearby that could withstand his constant punishment, beating on the very foundation of his prison, learning to channel his anger and violence in rhythm. So between the 5 of us, we’re all pretty fucked up in our own beautiful ways.

You guys are from the wonderful Vancouver, Canada. Describe to us the pros and cons of being an artist in Vancouver.

Pros and Cons – Vancouver is a beautiful city, with the ocean and mountains surrounding us. As an artist, it’s very challenging at times. Most of the venues that are band oriented on an indie level have taken on the LA “pay to play” policy.

You get tickets to sell and that’s how you get paid… after the promoter takes his cut and the soundman gets paid – the band gets what’s left over. There are a handful of good venues and a plethora of good bands looking for a stage. We are strategizing ways to invigorate the scene here.

Your music is a bit frisky, how come? Is there something you want us to think about as humans? Maybe question ourselves?

We absolutely want our fans to questions themselves. Life isn’t about being in a box, there are so many facets, so many choices. We are told by the masses to think a certain way, behave a certain way. HEAD delves into the darker side of life, revealing it’s secret thoughts and fantasies. Are we too controversial for some people?

The beauty is that we know there are tons of people that can relate, that have experienced the same events in their lives. Lyric likes to go to the edge and then take a step over, that’s who I am. You should take a listen to my radio show “Slip into the Fray” on Pacific Northwest Radio, every Thursday night at 9 PM PST. Warning, explicit content! www.pacificnorthwestradio.com

Please give us a brief history of HEAD.

After the initial bridging of minds to create the concept between Stone and I, we brought oD in to gel the band. Between the 3 of us, we started writing and developing the sound of HEAD. The Phantom (bass) and Styxx (drums) joined later, completing the package. In early 2015, we recorded and released our 1st self titled EP and went back into the studio to record our 17 track album Afraid to Sleep. Afraid to Sleep was released Feb 2016.

Who’s playing with you on stage?

Describe to us your show on stage and why we should come see you at your next gig.

HEAD delivers a listening and visual experience that leaves our fans wanting more. HEAD is theatrical, complete with costume, makeup and props. Each member of HEAD has a unique and compelling stage presence, creating an emotional roller coaster ride for HEAD fans Lyric has been described as a female Alice Cooper.

Stone wrote “whether it be the song’s subject matter, her yearning, soul-searching voice, or while she’s seductively whispering to the audience as one, her stage performance will leave you feeling as if you’ve known her all your life and at the same time as if you’ve never seen anyone like her”.

What’s your plans for the future. Are there any gigs or perhaps tours you’d like us to know about.

HEAD is currently writing for our next album for 2017. Our goal is to tour to the UK and Europe with the new album. Not a lot of people know about HEAD yet; maybe your magazine can help “fix” that! We’d love to get onboard a tour and open for some bigger name acts… someone like NIN would be great (Trent, are you reading this?)

Where will HEAD be in 5 years time?

HEAD will continue to write and record. In 5 years time – we should have at least 4 albums behind us at that point. HEAD is ever expanding and open to new possibilities. You may find us producing a theater piece or working with an orchestra. The sky’s the limit.