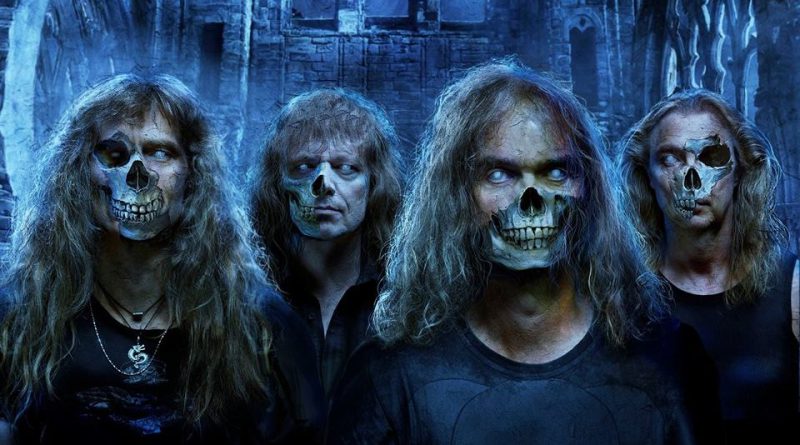 “Healed By Metal” is the latest album from German Metal legends Gravedigger. They formed back in 1984 with a short break between 1987-1993.

There have been many line up changes through the years with front man Chris Boltendhal being the only original member and mainstay overseeing the band as they unleash their eighteenth opus.

The title track opens things up with its fists punching the air singalong chorus, this is an instant winner, a full blown metal assault on your senses. It’s a valiant opener to Blast out loud and proud!

“When Night Falls” is next. It is full of powerful riffs and neck snapping and thrashing momentum. Spewing out of your speakers comes the excellent “Lawbreaker” and personal favourite for me. It has an an-thematic chorus and glass shattering guitar solo pummels and bruises you.

“Free Forever” opens in a more sedate fashion than the previous tracks its a competent tune but not as strong as the first three songs. “Call For War” is a pulsating march into the Battlefields with its heroic delivery and frenetic musicianship.

“Ten Commandments of Metal” is a song of worship and tribute to this thing we call Heavy Metal. It may be cheesy as hell but it will see you on your knees punching the air and praising Metal with Bolthendhal and his boys as Axel Ritt makes his guitar bleed and the Rhytmn section of Stefan Arnold Drums and Jens Beckers Bass nourish your ears with this hymn to the Metal cause!

Bolthendhals gravelly Vocals combined with galloping Guitars continue to keep you hooked as “The Hangman’s Eye” opens and sees Marcus Kniep Keyboards come more to the fore on this one.

“Kill Ritual” is another highlight on here as the band delve into the ghoulish and bizarre world of the dark arts.

Then errr “Hallelujah” comes bombing outta the blocks… its so Powerwolf and blatant with it! But a fun track of course. Just the comparisons are glaring! The Album comes to a close with “Laughing with the Dead”. It’s the slowest song on here but not to slow! It’s a powerful dark ending to an anthem fueled platter.

“Healed By Metal” ticks all the boxes for fans of Old School Metal, and is busting full of Metal Anthems to sing along to as you party into the night.