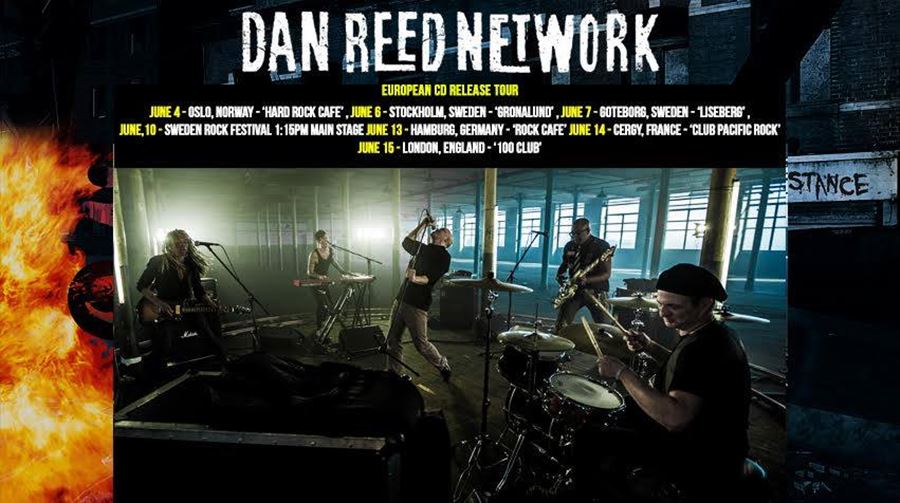 DAN REED NETWORK‘s brand new record Fight Another Day marks the anticipated return of one of the most infectious and gifted bands to come out in the Melodic Rock World in the second part of the 80s.

Formed originally in Portland, Oregon, the band began packing out local clubs from late 1984 through 1986 with their infectious mixture of hard rock, funk and soul.

After releasing their EP Breathless and having a top ten single on local radio, Steal Me, DRN signed to Polygram/Mercury Records. In the winter of 1987, the group released their self-titled debut album which was produced by Bruce Fairbairn (Bon Jovi, Aerosmith) and engineered/mixed by Mike Fraser in Vancouver, Canada. The first single, Ritual peaked at number 38 on the US Billboard Charts and became a staple of what became known as the Funk Rock genre.

The debut album received a wealth of positive reviews, not the least of which was a four-star write-up from the notoriously hard-to-please Rolling Stone Magazine.

DRN went over to Europe to support the album and had legendary performances at the Marquee Club in London and the The Melody Club in Stockholm, which are still talked about to this day.

While attending the Rock and Roll Hall of Fame + Museum induction ceremony in January 1989 in New York, Dan Reed met up with producer Nile Rodgers (Duran Duran, Madonna, David Bowie) which led to the creation of the second album Slam.

The Dan Reed Networks third album The Heat, produced by Bruce Fairbairn in 1991, was their biggest success in the UK, mostly due to the single Lover which was accompanied by a live video from Wembley Stadium filmed when they opened for the Stones.

Despite some success and disillusioned with the record business and all its trappings, the band eventually disbanded, much to the dismay of their supporters around the globe.

The members found it was incredibly fun being back together and consequently DRN decided it was a good time to bring the band and the music back to Europe and performed three sold out shows in Stockholm at Debaser, outside of London at the Enchanted Festival and at the Diamond Rock Club in Northern Ireland in 2013.

DRN was then invited to play at Englands Download Festival 2014 and then toured the UK again and Sweden in late 2015. The new album will be released right before the summer concert season which will see DRM appear, among others, at the prestigious Sweden Rock Festival in early June 2016.

Dan Reed says: It’s been 25 years since our last studio album ‘The Heat’ was released, and to be honest, I never envisioned making another DRN album despite countless people throughout the world encouraging us to do so.

But with a mixture of fate and a collective of trusted friends and supporters in the business coming to the table, I am excited to say we are poised to release a brand new record entitled “Fight Another Day” in 2016 on Frontiers, home of many artists that we in fact admired back when we were first hitting the scene and before.

Finally the stars aligned perfectly to have it all come together and make this album, and to have Derek Shulman, who originally singed DRN to Polygram in 1987, once again being in our lives as our co-manager and A&R man, brings us full circle.

As for the sound and approach of the album the band and I thought it would be a great experiment and interesting challenge to revisit what endeared the band to so many back in the day and deliver a rock record with funk and soul elements, strong melodies, but this time around incorporate even edgier lyrics while not losing sight that this release needed to be uplifting, infectious, and most of all, powerful when performed live.

The title “Fight Another Day” represents the fact that after 25 years we were able to gravitate back to the passion we discovered playing together all those years ago, and battle once more.

The band looks forward to the world’s response to this new labor of love, and this testament to the bonds of friendship and musical chemistry!