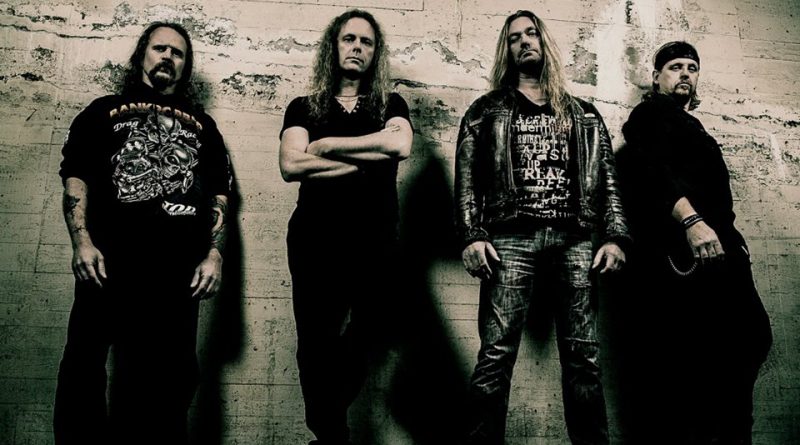 Formed way back in 1980 in Sweden, Syron Vanes never quite gained the success they so rightly deserved.

Releasing “Bringer of Evil” and “Revenge” in the mid Eighties the band were on the cusp of greatness but unfortunately for these Swedes this didn’t happen and they took an extended break in the Nineties returning in 2003 with their comeback Album “Insane” and playing at Sweden Rock the same year.

In 2007 the Band released “Property of” which had very little success and it took the guys seven years for the next release to come out in 2014 under the name “Evil Redux” this was greatly received and saw Syron Vanes play a sold out UK tour together with Jake E. Lee’s Red Dragon Cartel and Swedish gigs together with Sebastian Bach.

2016 saw them sign to Scandinavia’s Premier Rock and Metal Label Mighty Music and then release their strongest and most powerful album to date with “Chaos From A Distance”.

The Band set out their stall with the instantly catchy opening track, it oozes old School Metal with a 21st Century feel as the band unleash “Gods Of War” it’s a powerful introduction on this thirteen track traditional Metal Beast.

Rimbert Vahlstroem Vocals and guitar riffs are outstanding and strong throughout combined with the other guitarist on here Anders Hahnes “Angelchild” is an Album highlight.

Together with the next two songs the first Single and Album Title “Chaos From A Distance” the drums are given a severe work out by Mats Bergentz with wall shaking thudding bass lines from Anders Sellborn add all this together, and this addictive groove is going to be an ultimate fix live!

Things go from strength to strength with the excellent “Crucified” another crowd pleaser with its chorus and chugging guitars, it will surely delight and transfix as the Demons are released from inside and the guilty feel the pain of nails digging in to the flesh.

“The Seventh Day” continues to deliver some powerful rapturous Metal as the bass pounds and the towering metal batters your very being.

Things slow down a bit for “Trial By Spirit”. This is excellent, an epic song where Vahlstroem mixes his vocals with a glow of light then darkness in a pure chemistry of Metal delight.

“Lies” is fast and furious and will rock your soul, it’s powerful fast and simply pure Heavy Metal the way it should be.

“Shape of God” is a dark gritty absorbing number. “I Don’t Wanna See You Die” is punchy and addictive. “Saints on Fire” has an AOR feel about it with its chorus, kind of disappointing song compared to the previous tracks on here. Things are back on cue with “Master of Overkill”. It has a deep, dark feel about it, it’s a thunderous mix of heavy bass ripping the flesh from your bones with its deathly composition.

“Sleepwalking” brings this tremendous album to a close its a dynamic guitar infested marvellous piece to end a damn fine release.

Sweden seems to be able to continually amaze and astound you with their Heavy Metal and Hard Rock pedigree and it’s a shame Syron Vanes never quite made it in the past. But if “Chaos From A Distance” is anything to go by these Metallers will again be picked up by the big Magazines and Festivals and will be bringing their live wired shows to a venue near you in 2017!