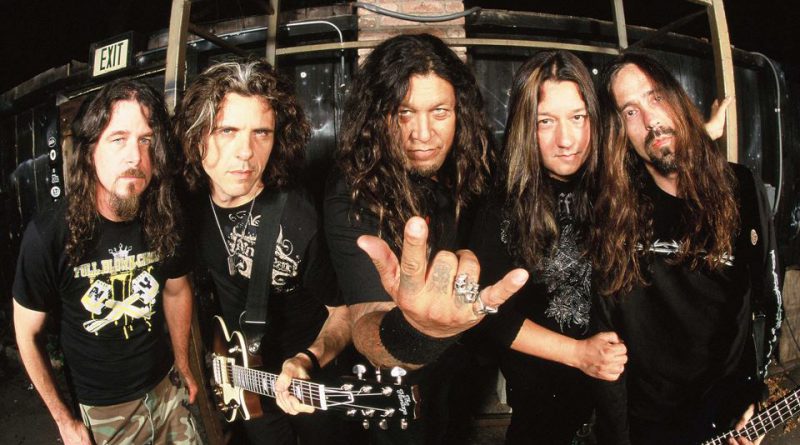 Next year Thrash maestros Testament celebrate 30 years in the business and unleash upon the world a true killer Thrashing giant, “Brotherhood of The Snake” will be out in a few day’s time.

The title track opens proceedings and the shredding ensues, Chuck Billy’s vocals erupt decimating all who stand in the way.

This is a Neck snappingly awesome start and one hell of an opener to an album of gigantic proportions, its full of ear splitting riffs that assault your senses and you are instantly hooked, glued to every track as the music works its way into your senses and melts your face off!

“The Pale King” sonically batters your head with fast as lightning riffs.

As on the bands last Album “Dark Roots of Earth” some of the tracks have Progressive,melodic pieces interspersed with some killer solos and hell hath no fury vocals from front man Chuck Billy.

“Stronghold” fires into life, Gene Hoglans Drums bring in a head smashingly addictive groove as the band set out to get you punching the air and banging your head damn hard!

“Seven Seals” is just short of six minutes long, a real highlight, as the Riffs from Skolnick and Petersen, backed by the monstrous thudding Bass of Steve Di Giorgio draw you in, captivating you, this isn’t a full on Thrash fest but a full on Groove fest of epic proportions with kick ass vocals from Chuck Billy.

“Born in A Rut” is up next with as heavy crunching delivery like the previous track its not a full on Thrasher but delivers some glorious moments.

“Centuries of Suffering” is back up to speed, bodies will be strewn around the mosh pit of Metal delirium, this is a chaotic storm of blood pumping intensity. “Neptunes Spear” is a crushing stomp a thon as the band continue to deliver, destroying your neck muscles with their addictive. potent sound.

“Black Jack” is a rabid number and I love the line from Chuck “Aces High and So am I ” leading into some fluid guitarmanship and thunderous drumming to totally satisfy you.

Penultimate track “Canna Business” is an unstoppable meaty treat to feed the hungriest of ravenous fans with delicious solos and pounding drums battering your ear drums! “The Number Game” brings things to a close its a Testament / Thrash Metal Fans dream and just has to be heard to be believed!

Personnally I thought they would struggle to better “Dark Roots of Earth” but these Thrashers have! especially when you consider that Megadeth, Anthrax, Exumer, Destruction and a few other Thrashing machines have already released sterling Albums this year and of course Metallica are due to release their latest opus soon, but as it stands “Brotherhood of The Snake” keeps the Studded leather covered fists punching higher than the aforementioned releases without a doubt, these guys should always have been part of the Big four having never deviated from their principles and stuck to their word “Brotherhood of The Snake” will destroy your brain cells and Thrash you senseless while giving you a history lesson… ALL HAIL TESTAMENT!

NB: The meaning behind the Album Title; Chuck Billy states “Brotherhood of the Snake” is inspired (as told by Sumerian scriptures dating more than 6,000 years ago), by a reputed secret society of the same name founded by a Draconian alien attributed to Ea, sometimes known as Enki.

According to said writings, man was created by Ea as the hybrid race we know as homo sapiens, to serve as slaves to mine Earth’s minerals and gold. The Brotherhood of the Snake, or simply “The Brotherhood,” was formed to enlighten mankind in secret, to debunk most manners of religion, and in the last 2000 years, particularly Christianity.

“The Brotherhood” has evolved over the years to form offshoot orders such as the Freemasons, the Rosicrucians, the Knight Templars and the Knights of Malta.