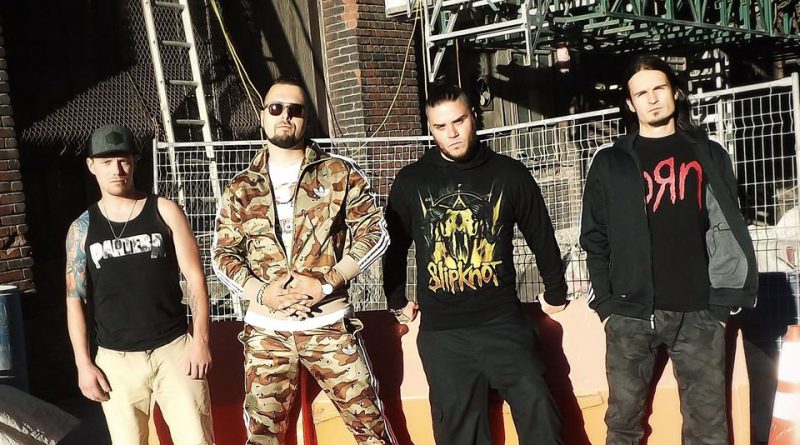 It’s not often we break our rules and review an EP album that’s already been released but Montreal’s Nu Metal Sensations Keychain are an exception as this release is gonna blow your mind.

Many so called Metal fans don’t like Nu Metal, well for me as long as it’s not pre-fabricated manufactured rubbish, and it has a addictive groove, we here at The Metal Gods Meltdown are in.

Having recently signed to Zombie Shark Records and at time of writing this Keychain are hitting the road in the USA off on an extensive tour.

These Canadians pump out some mean moves and grooves on “Breaking Out”, think Papa Roach, mixed in with Skindred, processed in a grinder, and mixed together, the result is the Raw meaty appeal of Nu Metal, rapping, booty shaking, partying, addictive tones of the highest order.

Opening with “Primetime” it’s mean beats, and rawness pull you in as JP LaChapelles angst filled vocals combine Bran Panics Guitar added to that the heavy, deep and deadly tones from the Bass courtesy of Jeff Jenkins with rhythmical Drumming from Cody Taylor, it all resonates in your brain, head fucking your grey cells!

This is energetic, fresh and uplifting, taking you into dark, cavernous, sweaty clubs we all know so well where the crowd move, dancing to the resonating tones of “Primetime”.

The band have included the Radio edit on this EP, it is the final track, I can’t see why this won’t get national airplay over the pond, and hopefully round the world.

Personal favourite of mine , and I gather a fans favourite is the superbly excellent Title track “Breaking Out” I just love the pounding drums, the fire and passion of this tune.

“Take Back Time” is a track I would not have been keen on once, however I have broadened my mind set, and so should any self-respecting Metal head as this track works its spell on you slowly tightening it’s grip on you until you submit and press replay over and over again.

“God Mode” reminds me of an angry hornets nest being kicked, they attack on mass as the riffs buzz and sting leaving their mark on you. “Payload” is a sick tune (hate that expression reminds me of diced carrots!) it’s one to turn up to eleven, oh hell they all are!

Blast it out and destroy your neighbors lives with Keychains “Payload”! Oh then soothe their poor souls with the instrumental, very nice and expertly executed. This EP is a divine slab of Nu Metal from our Canadian chums. KEYCHAIN RAWK!