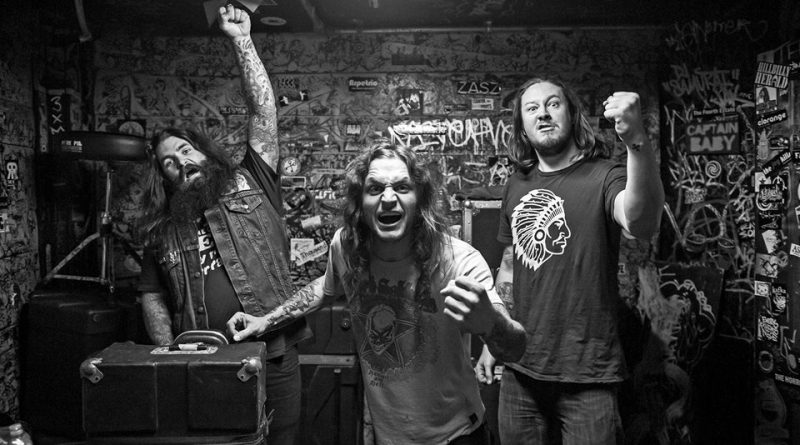 Three years after their widely-acclaimed full-length “II”, MOTHERSHIP are ready to propel the rock’n’roll crowds into orbit with their compelling new effort “High Strangeness”. Recorded and mixed by Ryan Lee and mastered by Tony Reed, this third album will be released through Heavy Psych Sounds in Europe and Ripple Music in North America.

The heavy-groovin’ trio enlightens us: “Our third offering is fueled by the same supersonic intergalactic heavy rock and roll music that has brought us together today. We are confident this new batch of tunes recorded and mixed by Ryan Lee (Crypt Trip) and mastered by Tony Reed (Mos Generator/Stone Axe) will solidify your being on board with us, and motivate you to invite others to take a trip on the ship and join us as well.

These songs perfectly capture the next chapter in our saga across this great planet and beyond. We are currently playing a few of these songs in our set, so come out and hear ’em LIVE before they are released!

“High Strangeness” will be issued on LTD solid yellow, black vinyl and CD.

Supersonic intergalactic heavy rock trio MOTHERSHIP based out of Dallas, TX give a real sense of hope that all is well in the universe, and that pure honest rock and roll has once again returned to this planet on a mission to unite true believers. Consisting of brothers Kyle Juett on bass and lead vocals, Kelley Juett on guitar and vocals and Judge Smith on drums, these guys have created a unique sound that satisfies like a steaming hot stew of UFO and Iron Maiden, blended with the southern swagger of Molly Hatchet and ZZ Top, paired with a deadly chalice of Black Sabbath.

MOTHERSHIP’s goal from the beginning has been to carry on the tradition of the classic rock style of the ’70′s, updated and amped up for the modern day. The band has been non-stop road warriors since the release of their debut album “I” in February 2013 on Ripple Music.

Since then, the band has released their sophomore effort “II”, and successfully invaded the United States, Canada, United Kingdom and Europe, playing either on festival stages, night clubs, or outdoors under the sun at motorcycle parties. This heavy rock juggernaut has only just begun their tear across the universal cosmos and have no plans of ever slowing down. Do not miss your chance to hop on board and join Mothership.