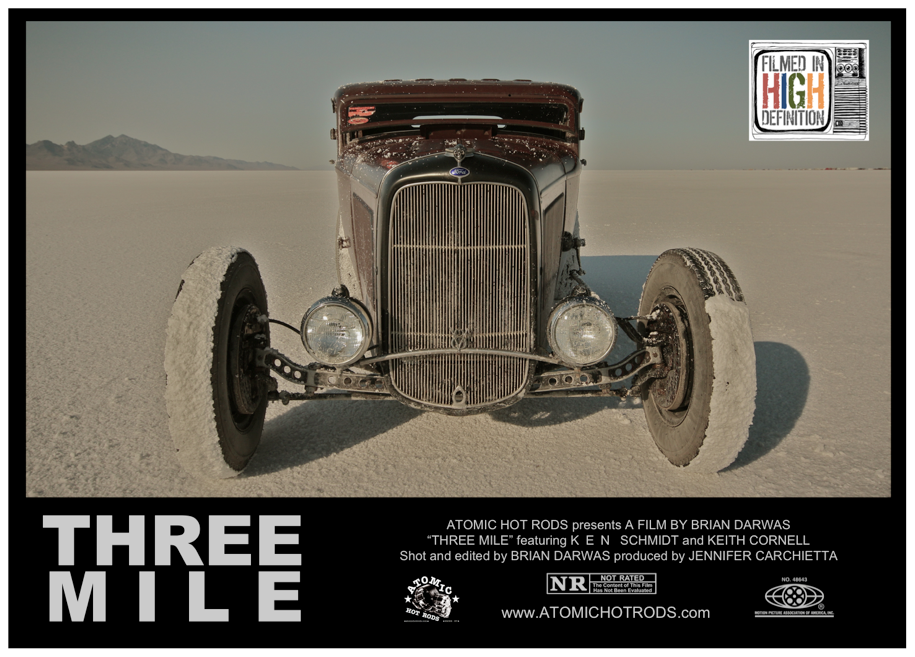 In his latest film, THREE MILE, hot rod film maker Brian Darwas shows us how important of a resource The Bonneville Salt Flats are to the automotive world. With salt levels diminishing at an alarming rate, causing the cancellation of Speedweek for two consecutive years, THREE MILE is the film that everyone needs to see.

Never before has showing the passion, hard work, and dedication behind the scenes been so important. Racing at Bonneville isn’t just a hobby, it’s a way of life. It creeps into the essence of everything these racers do all year long in preparation for that one week on the salt.

That one chance each year to not only take a stab at a new record, but test and develop new technologies that go into improving the automotive world. Many of the safety and handling features in new cars come directly from the race track to your driveway and ultimately to your family, keeping them safe out on the road.

Join Brian Darwas and the Rolling Bones Hot Rod Shop on a cross country trip full of roadside breakdowns, shop tours, parking lot parties and plenty of racing at what most people consider the birthplace of Hot Rodding, the legendary Bonneville Salt Flats.

All thirteen hot rods embark on a life time adventure from New York to Utah, where Keith Cornell breaks the world record for the fastest Ford Y-block. With enough salt pit rebuilds, tech inspections, and race runs to keep even the most jaded gearhead one the edge of their seat.

Be there to experience the the sun on your face and salt in the air when it all comes down to that THREE MILE pass.

Q: What prompted you (Brian Darwas) to make a film about the Rolling Bones annual trip to The Bonneville Salt Flats?

A: It’s no secret that the salt levels at Bonneville are being rapidly depleted through mineral mining in the area. I wanted to put a face to the events that go on during Speedweek. I wanted to show the hard work, dedication, and passion that goes into not only building a car for this event, but the lengths the drivers go to to get their cars out to the salt flats each year. Maybe if more people could get a peek inside this world and see what it means to all those involved, more people would be inclined do what they can to help solve this problem that we’re facing and save this natural wonder for future generations.

A: I went up to The Rolling Bones Shop, hopped in one of their cars and tagged along for the ride. I didn’t just film the trip as an outsider, I took the trip with them and filmed what we were all going through. Everyone puts in an immense amount of work to get these cars ready and to get them to Bonneville, it was awesome to be a part of that experience.

Q: What was your favorite thing about making this film?

A: Getting to ride in some of the most influential cars of this generation. Some people may not realize this, but The Rolling Bones are going to be in that group of elite hot rod builders that people are looking back on in fifty years. So, having the chance to ride in a car that’s going to be of great historical significance is truly something. It’s like going back in time to 1947 and taking a ride in Doane Spencer’s roadster knowing how important that car would be come to the world.

Q: And your least favorite?

A: Nothing, I enjoy being able to make movies and share them with the world. I want to document what’s happening today in the automotive world for future generations to look back on and be inspired by.