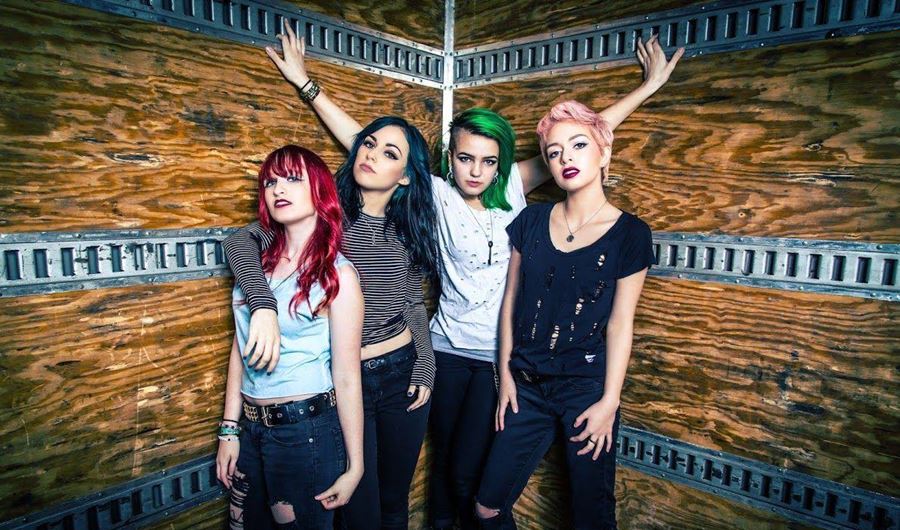 US all-female punk rockers DOLL SKIN released “IN YOUR FACE”, a full length version of their 2015 digital EP “IN YOUR FACE” on Friday, April 15th via EMP Label Group and eOne Distribution.

“It’s a rocking kick in the face that you don’t want to miss. We’ve got some fun new surprises on it and it’ll leave you wanting more” says DOLL SKIN bassist Nicole Rich.

Since forming in Phoenix in 2013, Doll Skin, Vocalist Sydney Dolezal, Guitarist Alex Snowden, Bassist Nicole Rich, and Drummer Meghan Herring have taken the World by storm, playing shows and touring with Social Distortion, Slunt, DRI, Metal Allegiance, HELLYEAH, Shiprocked 2016 and many more, with an international press blitz pouring in from around the Globe, and adds and spins on hundreds of radio stations around the World, including almost weekly spins since 2015 on the uber-influential LA station The World Famous KROQ, where they have become a favorite of legendary DJ Rodney Bingenheimer, with 3 different singles in rotation on his Rodney on the Roq.

The video for latest single “Let’s Be Honest” premiered exclusively via REVOLVER Magazine earlier this month.

The band who recently played Shiprocked 2016, as well as dates with HELLYEAH and the Dead Kennedys, are currently out with Otep, Lacey Sturm, September Mourning and Through Fire, before jumping on a handful of newly announced dates with HELLYEAH, Escape The Fate and Sunflower Dead.

With Otep, Lacey Sturm, September Mourning and Through Fire

With Hellyeah, Escape The Fate and Sunflower Dead