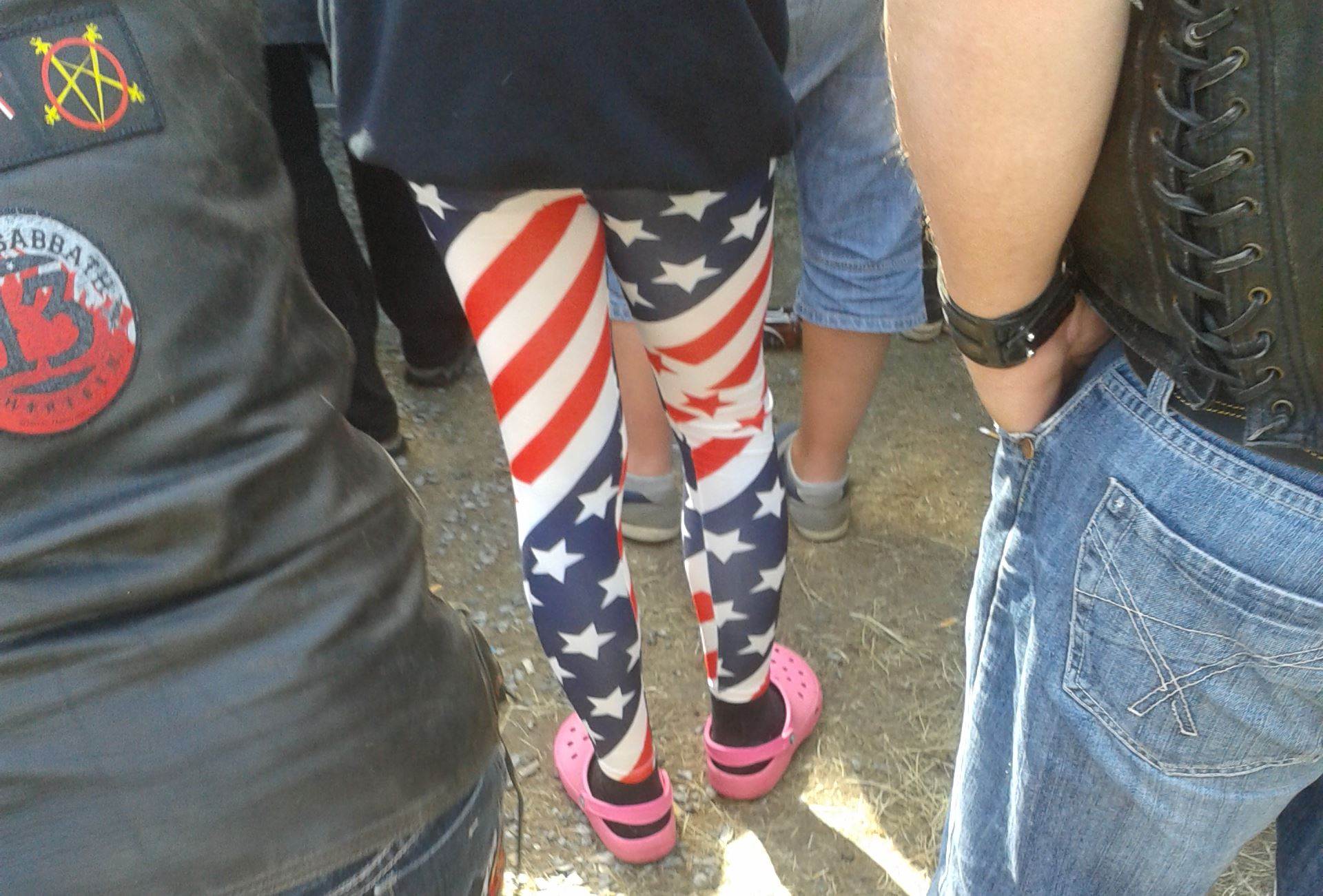 Sweden Rock Festival 2014. The dude in front of me are wearing those rubber clogs that are named after the excellent hockey player Peter Forsberg. He’s in his forties. Leather vest on, cutoffs and one of those horrid Jägermeister givaway bandanas. One arm around he shoulders of his buddy, other clutching a lukewarm beer in a plastic bottle. The lyrics of the W.A.S.P. track ”I wanna be somebody” is being shouted in unison. Summer peaking. Memories created.

An aging Blackie Lawless is fighting his own vocal cords who have seem to have taken a Gandalf-like stance in his throat. Monitors seem to have fucked off on him too. He’s having a shocker up there and I feel sorry for him. Far from the bloodspewing wildman I fell in love with in the 80’s. I stay for a few songs and fantasize…

What kind of animal Blackie might have employed to put his mascara on and what kind drugs such a beast favor during a task like that? I’m interrupted by a rugged biker girl who slides in from my left… She screams into my ear;

— WHAT BAND IS THIS?

— Iron Maiden, I reply and feel like I know who did Blackie’s mascara…

— FUUUCK, HOW COOL IS THAT!

— DIDN’T KNOW THEY WHERE STILL AROUND! YOU WANT SOME CIDER?

She offers me a sip from her stale cider, which I politely decline. I bum a cigarette and politely avoid her question about why i’m not gonna light it. I give up. I wanted to throw up wildly with my face hard pressed against my palms.

Never done that. Cant do that here either. I go backstage and try to calm myself with some free pinball. I’m haven’t even got my first multi ball on before a representative from a most whoreish Swedish booze company slides in from my right.

They flog quite unspectacular products with the logos of big metal bands on them.

— Do you know Bombus, the representative asks. Smells booze.

— No not at all, great band though. Way back in the day we might have rambled into each other at parties and such, but I don’t know the them at all.

— Great Andy, says The Representative, — Set up a meeting with them, please. We want to meet them and hand them some beers with other bands logos on them while we take photos of the whole thing!

It’s not the exact phrasing of The Representative, but the message is clear. As one of the last great rock bands I hope they never have to experience bullshit moments like that and I’m sure that the boys in Bombus have set themselves up

with all the beers they need. On top of that… Your whole booze flogging camp can fuck right off after feeling like 300 Euros was a bit rich to pay me and my people to help you promo an aging millionaire rock stars fuckin’ horrible ale a few months earlier.

To be close to the aging millionaire rock star while he held a seminar for Swedish executives at a business expo was to be the payment. My request for real money was met with confusion.

— Well call me or come find me when you have set the meeting up, Andy — Sure, no problem. But you gotta take one of these with you. I hand The rep an orange giveaway bandana that someone left by the pinball machine.

— OK, cool, thanks. But set us up with them OK? Call me later, OK! The rep does the phone-to-ear gesture with the bandana, the crown of the idiots, and disappears. To avoid the puke-in-palm thing described earlier I fixed my eyes on the

silvery sphere and my mind on whoever did Blackie’s makeup nowadays.

A dead sparrow is being firmly shoved into the front pocket of my best friends jeans vest. A bit of blood from its head stains whats left of a Manowar patch. It’s disgusting and beautiful. Our young age prevents us from paying any attention to the clinical hazards of carrying around dead birds in vests.

It seems the natural accessory for a night like this. A boombox blasting G.G Allin and a load of cheap smuggled beers bought from shady cabdrivers are being thrown over a barely hidden fence.

Five boys in different state of decline tumbles without any grace one by one over the fence and into onto the ground. A young securityguard approaches and is told to shut the fuck up lively, go about his business or face The Wrath. He sharpens up and agrees as expected.

Cause today is the day the boys from Gothenburg are off to see W.A.S.P. We are pumped up on hormones, anger, euphoria, cheap amphetamine, smuggled beer and youth.

We don’t like the song I Wanna Be Somebody… We like the songs Wild child, Kill, Fuck, Die and I fuck like a beast. A dead sparrow hits Blackie Lawless in his armored chest three songs into the show. It’s inevitable. After the song Blackie claims we are the most disgusting audience he ever had. We explode!

We claim victory and scream our lungs out for way longer than healty. Summer’s peaking. Memories created. We get thrown out of the gig but who cares.

We feel that immortality that come of hard music, drink, drugs and total disregard for anything or anyone but the next laugh.

This, quite rightly, made us the people you don’t want to meet and the ones you don’t want to date your daughters, wives, husbands, sons or sisters. The ones that listen to hard fuckin’ music and therefore have earned the divine right AND… skill to tell anyone to fuck off and get away with it. We throw dead birds and boomboxes with sketchy punkicons around us.

We’ll invite you to do lines of moorish amphetamine with us and then sell you overpriced pollen hash when your heart starts racing. Most of us shared our time between partying, perfecting our musicianship and our bands, the working man generally frowned upon and being fired in spectacular manners considered acts of pure divinity.

This was truly a great time to be alive. To us this was the essence of rock ‘n’ roll.