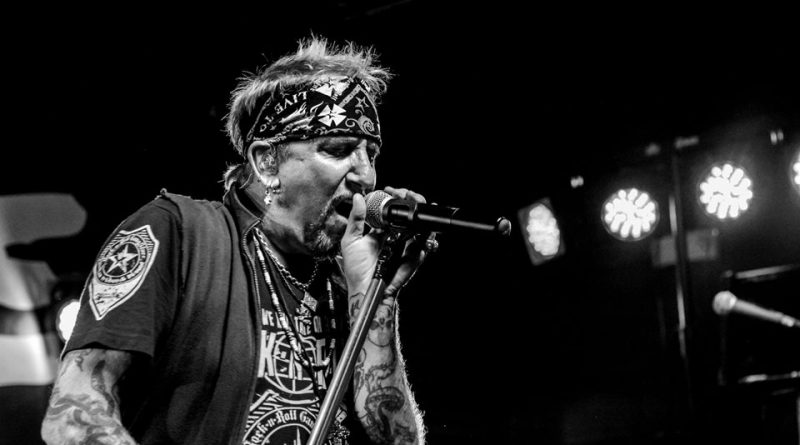 Jack Russell has had a turbulent career. From being the Front man of the hugely successful Hard Rockers Great White and achieving worldwide sales in excess of 8 million, to having Drug and Alcohol addictions and the well documented and nasty rift with former band mates in Great White.

Russell formed Jack Russell’s Great White in 2011 and returns in 2017 with “He Saw It Coming”. For me Jack Russell is the one and only true voice of Great White and this release is something special, featuring alongside himself his former band mate from Great White bassist-turned-guitarist Tony Montana (as a guitar player and keyboardist), Dan McNay (Montrose) on bass, Robby Lochner (Fight) on guitar and Dicki Fliszar (Skin) on drums.

Opening with “Sign of The Times” a telling tale of how the world has changed with the Internet, Social Media trolls and peoples needs to be famous no matter what the consequences, its a bouncing opener with no messing blues infused riffs.

Next we get “She Moves Me” a song that encapsulates old school Great White that runs nicely into the excellent foot tapping, boogying party piece “Crazy” with some magical blues induced riff-age this is a true winner to get even the most sad and boring individuals (who just stand statuesque in the crowd) moving their body, rocking and singing the hell outta the place.

“Love Don’t Live Here” is a calming number after the previous track, this is full of harmonious moments and hits a high with its addictive chorus and Delicious musicianship.

“My Addiction” is self explanatory if you know any thing about Mr. Russell’s dalliance with various substances and alcohol consumption.

This is a seductive piece of hard rocking insanity with the most kick ass guitar solo that creeps and crawls into your soul as the self assessment of struggles and battles against these narcotics bleeds outta of your speakers.

“Anything For You” is a song I have taken to my heart personally as my partner battles a life threatening illness, this is a beautiful ballad and that comes from someone who struggles to listen to ballads and fully appreciate them!

Next we get the title track “He Saw it Comin” is a raucous and rocking tune as Russell weaves the tale of how he made it his goal to become a Rock star after listening to The Beatles “Help” when he was six years old and this is him telling you “Hey Mutha Fuckers” I did it! “He saw it Coming” he knew and he damn well delivered it!

“Don’t Let Me Go” has the characteristic bluesy riffs so beloved of Great White fans, it is chilling out in your hammock with a cold beer, on a scorching hot summers day kinda track.

“Spy Vs Spy” is another uptempo piece to jump on the tables and party to! “Blame it on The Night” is very reminiscent of Alice Cooper in many ways circa “Poison” the music is a winning formula to enrapture the masses with the lyrical content deals with parental abuse it is cutting edge and tragic, in many ways yet bouncing music wise if that makes sense.

Final song “Godspeed” opens with a barber shop quartet score and is great fun this is one to end a night of perfectly delivered Blues and Rock that pierces your heart and will have you singing along all day everyday!

So to sum up. What you have here is a powerful roller coaster ride of good time boogying, head shaking, tear jerking, deep and intense musicianship to sate the millions of Jack Russell’s fans appetites.