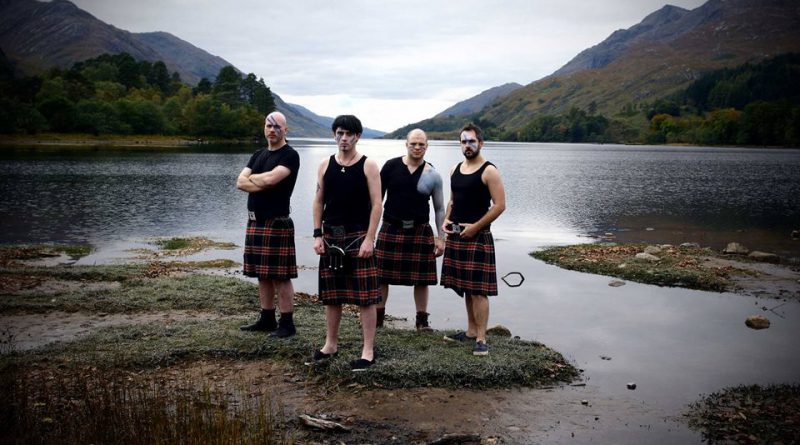 It is based on the uprising against the English and the Highlanders defeat at Culloden Moor in 1746. The album opens with “Will Ye No Come Back Again”. An instrumental that draws you to the highlands of Scotland with dramatic effect as the Bag pipes play and the cold winds swirl through the turbulent times of Scotland’s past with the sounds of conflict taking you on an atmospheric journey as mournful keyboards and a male choir are added to the mix.

This is a modern take on a song which was originally written by Lady Nairne in the first half of the nineteenth century, telling of the Scots hope for the return of Bonnie Prince Charlie following his defeat on the blood soaked moor of Culloden.

There are elements of folk musicality, you are shrouded in history and the the mists of time as “The Yellow Locks of Charlie” builds from its folksy introduction into a Black Metal giant as the band recount the tale drawing inspiration from Henry Scott Ridell’s Scottish traditional song.

The thing I really like about this Album are the atmospherics and use of traditional instruments combined with the violence of Melodic Black Metal, that claws at your consciousness and invigorates your mind.

The shortest track on here, apart from the Instrumentals runs just short of five minutes. “The Standard on the Braes o’Mar” this is a furious take on the song by Alexander Laing on the Jacobite uprisings of Braemar in 1715.

The beats of Bryan Hamilton’s Drums transport you to the Battlefields of old with poignant Vocals from Reni McDonald adding to the mix.

This is a real highlight together with the next track “Wha Wadna Fecht for Charlie” the guitarmanship enraptures you with beautiful harmonies from Alan Buchan and the super talented Reni McDonald who sings and plays the Guitar and Keyboards though out this opus.

Next is a sad melancholic instrumental “Flora McDonald” she was a heroine who assisted Edward Stewart’s escape to the Isle of Skye by taking him in a small boat disguised as her Irish maid “Betty Burke”.

Next is “Sound the Pibroch” its power and brutality floods out of your speakers as this piece works its way deep into your being. Its aggressive tones intermingle with an imposing intent, deep bass lines from Tony Dunn and haunting Keys make this an imposing intense tune that sends shivers up and down your spine as the song reaches its crescendo.

“Fuigheall” is an epic piece full of Bloodthirsty moments and lugubrious Keyboards its a gallant and gritty tune.

“The Last of The Stuarts” is a song that refers to Anne the last reigning sovereign of the Stuart line who became Queen of England, Scotland and Ireland on 8 March 1702. The track has everything, Bagpipes, Flutes, heavy riffs, Blast beats and heroic verve and brings to a close a very strong effective Album at the start of 2017.

Scotland has a special place in this Englishman’s Heart and actually living close to Culloden Moor and the History that surrounds us here makes this Album just a touch more even special to me and makes you want to delve deeper into the past.

So Finally Falkirks motto is thus “Better Meddle wi ‘the De’il than the Bairns O Falkirk, “It’s better to associate with the devil than the Falkirk kids”. A true sentiment if ever there was one for these Scots stood on the “Hill of Rising Stone” (Cnoc an Tursa).

1. Will Ye No Come Back Again
2. The Yellow Locks of Charlie
3. The Standard on the Braes o’Mar
4. Wha Wadna Fecht for Charlie
5. Flora MacDonald
6. Sound the Pibroch
7. Fuigheall
8. The Last of the Stuarts