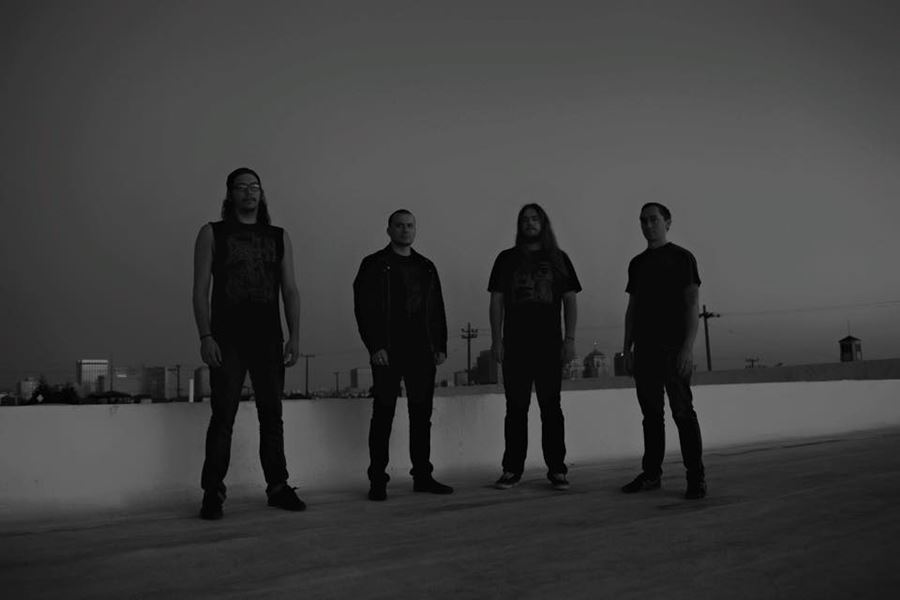 The debut record from Oakland, California d-beat act ATRAMENT, “Eternal Downfall”, will be released jointly by Broken Limbs in the US and Argento Records in Europe on March 4, 2016. Atrament is this generation’s answer to the classic and unforgiving Swedish and British style d-beat crust, Norwegian black metal, and 90’s Gothenberg death metal.

Produced by Greg Wilkinson (Graves At Sea, Iron Lung, Noothgrush, Vastum, Pallbearer) and mastered by Brad Boatright, Atrament’s sound retains its raw wildness while posing a fatal challenge to any speaker or sound system daring enough to step in its path and risk being devoured whole.

Conceptually Atrament’s music is built upon a nightmarish landscape of hallucinating ruin, a wretched sonic world in which humanity is rejected as a whole and a tomb of ash and radioactive fallout is summoned to encase it and devour it forever.

While remaining true to the roots of UK anarcho-punk and 90s Scandinavian-branded black and death metal, Atrament’s punishing, grim and embittered songs blend d-beat crust, black metal and death metal with seamless ferocity, creating a bloodthirsty sonic tapestry where the lines between new and old, metal and punk seem constantly blurred yet perfectly defined in an endless rampage of cascading aural violence.

The band’s album release show will be held at The Golden Bull in Oakland, CA on March 12th. The show also features Acephalix and Deathgrave.

ATRAMENT: Birthed in the gutters of West Oakland in the fall of 2014, Atrament is a blackened d-beat/crust band that features current and former members of Moral Void, Black September, Necrot and Abstracter. The band coalesced around a shared love of its members for bands like Doom, Wolfpack, Amebix, Bolt Thrower, Napalm Death and Darkthrone and has evolved to be a conduit for some of the most abject, war-injected, bestial and barbaric aural desecration imaginable.

“Punks and black metalheads unite, because your genres have finally found each other.” – Merchants of Air

Recorded and mixed at Earhammer Studios in Oakland, CA by Greg Wilkinson. Mastered at Audiosiege in Portland, OR by Brad Boatright. Artwork by Stephen Wilson.