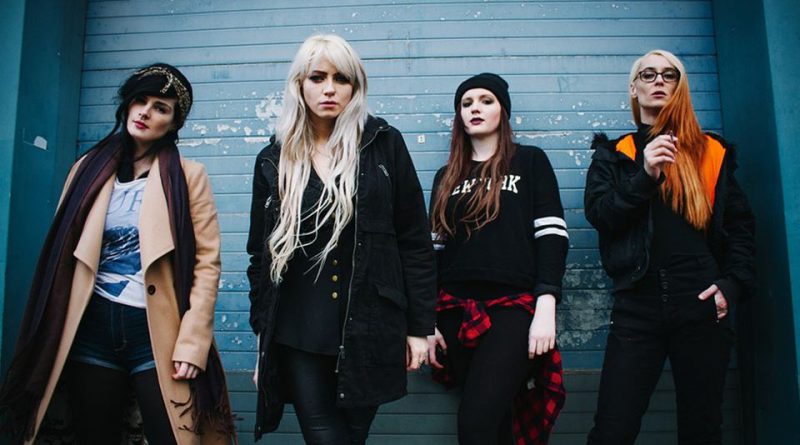 Courtesans are a rising force from London. They have released an EP full to the brim with angst and edgy feelings.

“Better Safe Than Sober” crosses over between Metal, Rock and Pop induced mayhem.

They take their influences from Narcissism, Humanism, Sexuality, Violence, Media and Passion with various other features of the human condition and the crazy unsettling world we live in today.

They are a four piece featuring Sinead La Bella on Vocals, Saffire Sanchez on Guitar, Agnes D. Jones on Bass and Vikki Frances on Drums.

The EP opens with the highly hypnotic and simply delicious “Mesmerise”. Sinead La Bellas vocals draw you in and truly do what the title of the song suggests.

Sineads vocals are exceptional through out this five track EP.

It took me ages to listen to the rest of the tracks I kept hitting replay constantly on the first track, well in fact all of them!

“Feel The Same” is an emotionally charged track that sees Sinead rhyming the verses.

It feels painful yet euphoric, the rest of the band cut in and out through out this song as La Bella lays her heart and feelings on the line with so much verve and passion, leaving you open mouthed and fully absorbed in this four and a half minute number.

“John Doe” kind of floats into your presence as the lyrics take a hold of you with an expansive and touching delivery.

“Knowwhere” see the Rhythm Section of Agnes D.Jones on Bass and Vikki Frances on Drums stomp and grind your soul as Saffire Sanchez riffs steamroller everything in sight alongside La Bellas absorbing Vocals.

“Day The Tide” brings this release to a close its a pulsating, grooving vibe and is going to be epic live as are any of the tracks of here, unfortunately that’s the end of the EP so hit replay as you wont be able to get enough of these Londoners!

This four piece have a massive future ahead of them, having already released an Album last year titled “1917” this is one to grab a hold of and go as well as this stunning EP.

I believe Courtesans have the right stuff to break into the mainstream and give it the huge kick up the ass it so rightly fucking deserves.

“Better Safe Than Sober” is Immense make sure you catch them live soon! WE SURE WILL!