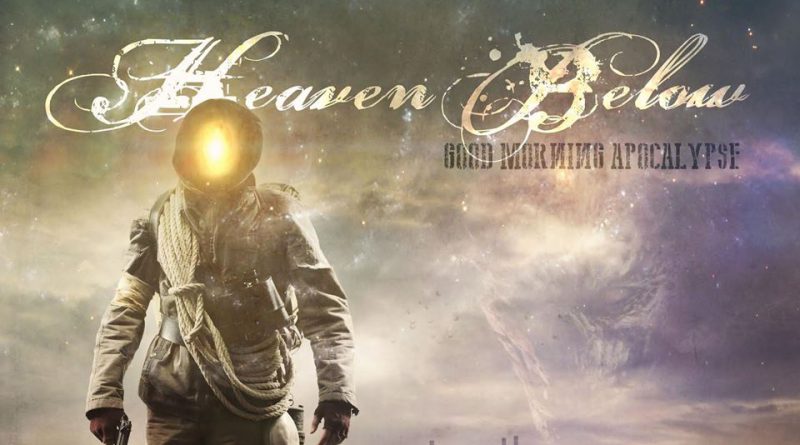 Four years in the making “Good Morning Apocalypse” surfaces, it is both intriguing and beguiling featuring legends of the Metal scene in the form of Lita Ford, Udo Dirkschneider (UDO and Accept), Jason McMaster (Dangerous Toys, Broken Teeth) and Kobra (Kobra and The Lotus).

This release is a hugely ambitious enterprise by Lita Fords guitarist, and founding member of Heaven Below Patrick Kennison.

The band achieved much publicity with their rock hit “When Daylight Dies” and the follow up collaboration with Willian Shatner for the Cover of Rush’s “Subdivisions”.

Not to give too much away in a recent interview with The Metal Gods Meltdown Kennison stated that the idea of this opus is “based on, and revolves around a soldier who agrees to undertake an experiment for an evil Doctor who has found a way to reunite people with loved ones on the other side but his plans go awry”

You become fascinated right away from the opening Salvo of “Nefarious Angels” with the backing choirs and Metal dynamite, this release explodes into life as the story unfolds With the added vocal contributions from Jason McMaster and Patrick Kennison it’s a scorching opener that tickles the old brain matter as well as giving your head a damn good hammering.

Shad Wilhelms drums with the Metal Choir deliver the full conceptual package. “Renegade Protest Movement” delivers a movement of fists punching the air and a sing along chorus that’s just going to be a dream live as the riffs bleed, dripping from your speaker’s courtesy of Lucas Kanopa on joint Guitars with Kennison and the deep booming Bass moves the mountains of Valhalla.

Holding on to the edge of sanity and weaving like a high wire artist with a bad hangover miles above the skyline this shakes you , warning you as the mind almost succumbs to the evil Drs plans.

My favourite track on here is the superbly excellent “Devilina and The Damage Done” it features Kobra Paige on guest vocals ,it’s a bad ass tune that rocks you to the core as the “Damage is Done” and is possibly one of the best vocal performances I have heard from Kobra in quite a while.

Her voice accompanied with Kennsion works really well and is something I hope she decides to do more of in the future.

“Nightfall Comes to Life” sees the story coming together ,piece by piece of the jigsaw, revealing it’s tale of woe and the devastating effects of the experimentation by Dr. Faust.

Another track I can’t stop playing is the deliciously addictive song “Killing The Deadman” its heavy, neck snappinly fast as you get scarred from the rhythm sections quick fire approach, I just love the brief Mandolin! interlude and the “Don’t you fuck with me” attitude of this number.

“Running Under Satans Hand” sees Patrick Kennisons Boss Lita Ford making an appearance and this one takes a sinister turn of gigantic proportions as being brought back to life is asked for.

“Death Battalion” is a full frontal assault on your senses, a powerful and emotive track that leads to “Bonded by Blood” this is a heartfelt plea and prickles your skin as the story continues to engross you, then the Metal Legend that is Mr. Udo Dirkschneider enters the fray with the “Balls to the Wall” momentum he’s so loved for on the “War Of Gods “-part “Black Sunrise/ War of Gods” laying down his powerful vocals, adding more and more to this masterpiece by Heaven Below in the mid-section of the piece.

Penultimate song “Among The Wolves /Worldwide Suicide” is a masterstroke of musical accomplishment as the story starts to reach it’s conclusion , the final track “I Would Do It Again/ Burial at Sunset” will chill you to the bone, not wanting to spoil the finale of this epic story I will leave it there!

I would say this is one of the best concept Albums I have heard since Queensrÿches “Operation Mindcrime” and there are hopes that this idea could be made into a film at some stage. Make sure you check out the Interview with Patrick Kennison here on The Metal Gods Meltdown. IT RAWKS!