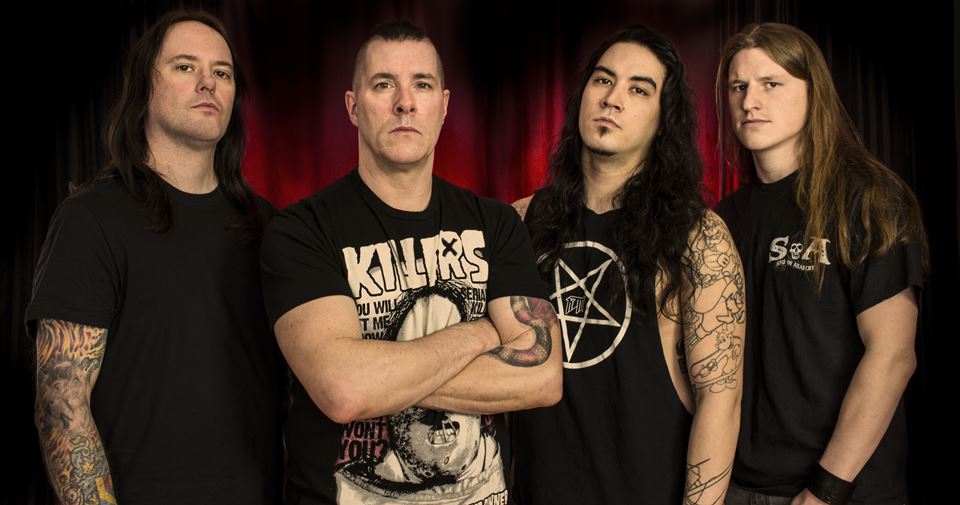 Canadas pride Annihilator, spearheaded by handyman Jeff Waters are releasing their 15th studio album titled ”Suicide Society” on September 18. Cool indeed. But let’s get serious, who wants to read another interview all about the new album? Wouldn’t it be awesome to dig a little deeper in the man, the myth, Jeff Waters trials and tribulations?

From a hotel room in Hannover, Germany, Jeff phones me up telling me he’s been there for a couple of weeks shooting some videos.

He goes on saying ”for Annihilator we’d be lucky to get to do one video, but this time Warner and UDR Records said to get over here to shoot two videos from our new album ‘Suicide Society’, so that was good news.”

Haven’t videos gotten bigger lately? MTV kinda killed it off with their pregnant teens, but thanks to the internet they’re getting attention again. For me, I know videos are important but people would tell me for many years it’s just not worth spending the money ‘cause it just doesn’t get played for a lot of bands, and I thought OK, if that’s the way it is I was fine with that, I didn’t think about it.

Videos are really the last thing I care about, they’re not important to me, BUT I’m the first person in the morning to sit down with a cup of coffee and watch the new Slayer that came out and just crank it on my stereo, you know. I like watching the new single that just came out.

But for Annihilator it’s just a bad business decisions so it wasn’t a priority. Just, write the album, be happy with it, hope that the fans and the press like it, go do the tour, do the festivals, have fun, give it your best and do it again.

I’d like to do a video for every album but it just almost never happened. We shot two videos last week and now they want us to do a third video and I’m like THREE VIDEOS?!
I wish they’d thought about that when I was young and good looking, not a 49 year old man (laughs).

Not to give away all at once, what’s the song for the third video gonna be? It’s called ‘Creepin’ again’, its more of a Annihilator demo 1995 era song.

Of course I wanna talk about “Suicide Society”, due for release September 18, but fans of Annihilator probably already know more or less everything about it due to standardized questions in other media, so I thought we’d focus more on you personally.

I’m pretty open with stuff, I tried my best right from the very beginning to be honest about everything. As a teenager I would see bands on the video channel I knew were very clearly influenced by other bands go like “We are completely original and no one sounds like us.”

I was so laughing at that, shaking my head saying That’s not true! You sound like this band or that band, you really do ‘cause you like that band. Either that or you’re trying to sell out and do something dishonest. So I said right from the beginning I was gonna go out and just say it like it is.

Annihilator is a combination of fifty different bands and guitar players that I loved as a teenager in hard rock, in rock, in heavy metal and thrash. Even in punk, a bit of classical, jazz and blues.
Almost everything I get is not original. It comes from somewhere.

So I just thought I’d be honest about it. My originality, and I am in some ways and my sound with me and the band is how I put together all of the different influences that I had in my life.

Partly because the singer and the drummer that was just perfect for what I was doing and it was just the best songs and the best time. But if you want me to tell you honestly, ‘Suicide Society” is a 8,8 out of 10.

You were born in Canada February 13:th 1966. Yes, I was accually adopted. Back in ‘66 it was… well, if you had a mother that wasn’t married it was a very, very bad thing. Back then it was terrible and society didn’t want to know.

So my birth mother lived in Ottawa, Canada and what they would do when a 17 year old girl got pregnant would be to pull her out of the school and tell everyone that it is a medical surgery thing and that she had a health problem, and they would drive the young girls to different cities where they weren’t recognized and have their babies there.

Once they had their baby they would take it away and offer the baby to parents who couldn’t have children on their own. It was a very strange time but I was just a baby so I didn’t know what was going on of course. The parents that adopted me also lived in Ottawa and they are my parents, I mean, the people you grow up with are your mother and father. I was very lucky I had good parents.

Have you ever met your biological parents? In 2001 I met my birth mother and she lived in Edmonton in the west of Canada, and I was lucky because a lot of people who find their mother or father many years later is met by many bad and sad stories.

Some of them have died or some of them don’t want to see you, they’re drug addicts or there’s some bad thing happening in the family so they don’t want to talk to you or see you but I had a good experience.

”Funny thing” by the way, did you know AnniFrid Lyngstad from Abba had a German soldier stationed in Norway during WW2 as a father? Wow! No, I didn’t. Do you know if she ever found her father?

In a way, as far as I know. I think her father, named Alfred Haase, sent her a letter or something later in life saying he was the dad, but with all the crazy fans and so on I think she kinda ignored it at first. Not sure if they got to meet before he passed away or not, but I think so.

Anyway, growing up, when did you start playing guitar? Don’t remember exactly but I was 8-10 years old, something like that. Apparently I walked by a store with my mother when I was very young and I stopped and watched someone playing acoustic guitar and I didn’t want to leave so my mother knew right away that “oh, that’s something to keep him busy” so she bought me a big folk guitar, a country and western kinda guitar.

It was the same size as I was. I took lessons for a couple of years but you know, you’re just a little kid so you go once a week for half an hour and you really don’t learn very much but it keeps you interested.

The instructor said I was pretty good and that I should try classical music so I tried that for a couple of years, I took one year of jazz… I was probably around 14 at the time, but jazz was just too much for my brain, it was just not what I wanted to do it was very complex.

I started to see the first covers from AC/DC and KISS and, you know, Saturday Night’s Alright (for fighting) with Elton John with a loud rhythm guitar riff on the radio, and I Was Made For Loving You with KISS had some solo’s screaming Ace Frehley so I was already attracted to electric guitar.

My mom finally gave in and bought me a cheap electric for 200$ and that’s it. I just slowly got into it changed from rock, disco and pop to hard rock with Sweets record Desolation Boulevard, these really cool rock ‘n roll albums which progressed to KISS and AC/DC, then Van Halen. I discovered Sabbath with Ozzy, Priest, Maiden and then I jumped over to the heavy stuff.

I still had Scorpions, Accept, Saxon, Anvil and Razor but soon enough Slayer and the big four followed. I wanted to go for the heavy style in music.

So it was a gradual transition from disco KISS to heavy thrash? That was exactly how it happened and I’m so glad I got to experience the hard rock side first, the commercial hard rock like Def Leppard’s first couple of albums. I’m glad I got that ‘cause those were the times when Def Leppard would do Rock Brigade, Rel. 14 March, 1980. Album “On Through The Night”, that’s one of the coolest songs of all time!

But most people don’t know it, it’s on an album that even Joe Elliott said he don’t like. So stupid! It’s one of the best albums ever in music. I just got to progress into different styles and learn things along the way from all the players and all the bands, and by the time I hit the first Slayer or Metallica album I got to mix all the above. Except for disco KISS. I don’t think that’s there.

You mentioned the album covers from KISS and AC/DC, how have you worked with your own covers for Annihilator? Sometimes I’m too busy to pay much attention for album covers, you know, sometimes you’re under the gun and don’t spend the time you should to make sure everything is perfect. Sometimes you’ll have covers that are OK, maybe not that great, and other times I can spend the time with the artist and something great comes out of it.

Or just the artist comes up with the greatness, I just have an general idea and the artist is the one that does it all. I’ll turn around and holy shit! That’s awesome, don’t touch it. I love covers. I don’t have a record player at home but I have lots of vinyls, and what I’ll do is put them up on the wall in my studio or in the hallway leading in ‘cause I love looking at these covers.

Speaking of great covers, because of the impact they had on my life and my career I’d have to say ‘KISS Alive II’, both the outside and the inside with the gold stage seeing them on their risers. The inside of that is just incredible.

There are lot’s of other ones. I did get impacted a lot by the KISS covers, I love the “Love Gun” cover. It was just so freaky to me, the big gods of rock standing above all these pretty girls. Kinda degrading to women. Not a good thing.