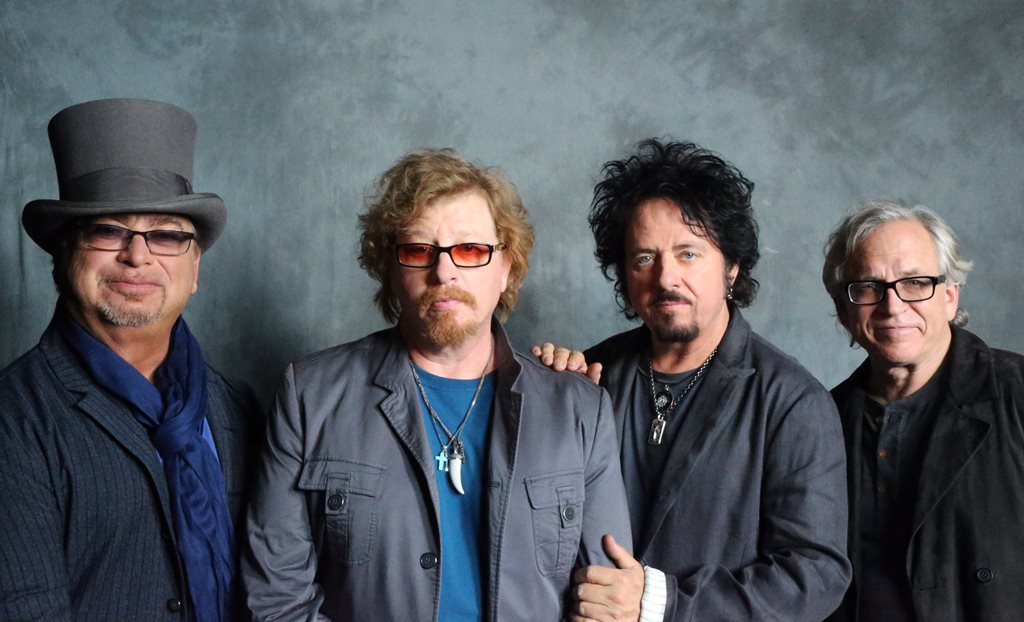 David Paich, founding member and keyboardist of the presidential group Toto. About recording what seems to be their last ever album, titled XIV, and who makes David starstruck.

Is this really the last Toto album? Well, for now it is. (laughter) I thought the last one was, I never say never but right now, I mean we don’t have any plans to do another album. But who knows what lies in the future. There’s no plans to meet right now to talk about doing another album, we’re just happy we did this album and we’re happy to go unpromoted and play new music for our fans.

Are you putting a lot of effort into the last tour? Yeah! When you go on tour it’s typical that you kind of bring the same show around so everybody sees it. Now we’re gonna change it up. Almost entirely a new set list, of course there’ll be some of the hits in there but I think we’re gonna play some of the songs we’ve never played in years and we’re gonna add 4-5 new songs from the new album.

It’s gonna be very exciting and challenging work. We’re working on it at the very moment. There’s gonna be lots of surprises. You’re gonna hear songs you haven’t heard before, sung by people you’ve never heard before.

Are you feeling nervous since you’ve never done it before? I’m feeling kind of eager. Not nervous so much, just excited. You get butterflies because this is what we do. We’ve practiced this all of our lives. It’s good to get out of your comfort zone.

So occasionally when we perform songs we haven’t, or rarely, done before we’re a little bit out of our comfort zone ‘cause it’s not just the same old ‘Yeah we’ve done this before, and it’s easy to do’, it’s challenging ‘cause you’ve gotta practice and get comfortable with the material you wrote a while back or it’s new material that you haven’t played live.

So there’s a little bit of nervousness but I think it’s more eagerness to conquer it and really own the new material.

Do you ever get nervous these days? I’ve heard artists before saying that “It’s more horrifying playing in front of 20 people than 20,000 people”. Well, I don’t know who said that but it’s all according to how comfortable you are with what you’re doing.

If you’ve done your homework and your preparation and have played the song enough, it shouldn’t matter. Your stage is your stage, it’s the same size every time.

Like what they say to sports guys when people play basketball “It doesn’t matter whether you’re in a high school gym with 100 people or in a championship with 15,000”. The size of the hoops and the playing field is the exact same.

So if you’ve done your homework and you’re confident and know what you’re doing, it should be the same. But that being said it’s a lot more nerve wrecking to play for 200 people than 20,000 people, because 20,000 people are usually right with you every step of the way. Sometimes you’ve gotta work a little harder to get 200 people going.

Up to the bands break up, many thought there would be no more Toto. What made you change your mind? When Mike Porcaro (who had ALS) wasn’t able to play in Toto anymore and was starting to get worse, the band thought of doing some fund raisers to raise some money for Mike and his family, as well as ALS awareness.

So we were going to do a couple of clubs and realized that we had to do like 9 or 10 to make a difference. So we got some calls from our manager at the time that said “Well there’s some interests out there for Toto to get back together and to maybe do a summer tour here.” and in that way help Mike to get better. That was the main reason we got back together, to help Mike.

So, close to 10 years since the last album… Since that album, one of the reason why I didn’t participate was because my sister was very ill at the time and I had to stay home and be part of her support group. Steve Porcaro had been working as the musical composer in the hit TV series Justified, which is something he always wanted to do.

Joseph Williams I think was working in TV. Lukather took the scepter and kept the band together. After our second summer tour we decided we wanted to capture this because it may be the last time Toto was out, capture it as a DVD.

Just over a year ago we started writing songs and one song led to another and we started really enjoying it. This whole pool of creativity that happens when Toto gets together in the studio.

We started to get our momentum and getting our legs back here and now you have the album we have today. We’re very happy with it. It’s one of our favorite albums and we couldn’t be more excited about it.

What are the differences recording an album today compared to doing it in the ‘70s for you? It was a lot more actual playing back then, before we had computers and samples and all that stuff we have today. It was a lot more hands on and a lot more immediately.

I’d write a song and just start playing it on the spot and we start sitting down and learning it really quickly and then we record it. Now it’s more kind of like putting together a house. We start building, it’s almost like making a demo but you’re not making a demo, you’re making a master recording.

It starts out with a little drum track that we can work with, but still Steve Lukather, myself and Joseph Williams were running out of time in the studio and began writing on the spot. And so we began recording our parts on there, and some of them stayed and sometimes you have to redo them. But it’s kind of like making a cake, you’re building it from the bottom-up. You’ve gotta keep up with technology and use the technology to your advantage.

Walk me through the writing process of the new album. When we make a Toto album somebody will bring a song they’ve written and we’ll hear it and we’ll go ‘hmm, that’s an interesting song’ and it may stay or may not, like All the Tears That Shine.

It was a piece that I had from the FIB (Falling in Between) album, I started that song the very last day of the FIB album and didn’t do anything with it for a few years and I started writing it before we pioneered this album and finished it up.

Now, the rest of the album was totally written in the studio, we’ll get two or three of us together in a room and someone will just launch something and it’ll spawn another idea and I’ll get on keyboards, Joseph will pick up on Mike and we just start jamming on it and tooling around.

By the end of an hour or two we’ll have a little bit of what resembles a song, and then people will go home and work on the lyrics. If we have a part of a lyric we’ll spend the rest of the couple of months twisting them in and out. It’s done different ways, Steve Porcaro did his songs at his studio by himself and would bring in a finished song for us to listen to.

What do you think makes a song really good? What’s the first thing you listen to determine if it is? I’d use to say melody or the groove, but now I’m more lyrically oriented and I look for story driven songs. If something has a really good lyric, it moves me. But it also at the same time has to have a vocal, it doesn’t have to be a great vocal but just an interesting vocal that makes me believe the lyric that the guy’s singing. If I hear that, it kind of sucks me in.

You’ve been in collaboration with a wide range of musicians, from Miles Davis to Eddie van Halen. What has been your proudest moment in your career so far? When we finished Rosanna I think we knew we had something of a song here, something different, something new and when we won the award for it, Record of the Year, it wasn’t the win but the fact that Elton John stood up before anybody did and I think that he’s one of the most phenomenal talents that has ever been on earth!

One of them is my first hit record that I played on which was Diamond Girl back in the 70’s with Seals and Crofts. There’s so many moments when Miles Davis came and played on our record we just looked at ourselves just like ‘pinch me’! It was a pinch me moment for sure!

What’s next for you personally and Toto? Well, the tour basically takes all of my time, there’s a lot of preparation for it. I’m always trying keep practicing and stay writing songs and trying to co-write songs with other people and always looking for new fresh talent out there with young singers.

I’m just trying to stay excited and stay inspired. I just finished producing a record for a very talented young person named Andreas Varady. He’s a jazz guitarist from Hungary. He plays like George Benson, but he has a sound all of his own. It was fun! I got to produce and play on a jazz album and it was very challenging and very satisfying.

Last question: Have you ever been to Africa? Yes I have. We were in Cape Town in Johannesburg. I think it was ‘97 I’m not sure of the year though. When we played there it was a dream come true.

I never thought that would happen, but I was hoping it would happen and we recruited some musicians some and some singers that came on stage and played with us and it was just an amazing magical time. It’s in my memory forever. In my heart and memory.